Cast in this unlikely role, ill-equipped to act 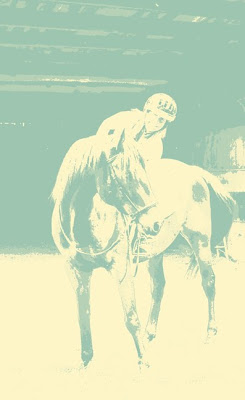 Pie and I had a crazy bad ride this morning. The day was sunny and calm. Perfect conditions. Pie was so loving and sweet during grooming and tacking. He usually lets me know if he is antsy during this time, but this morning he was sleepy and quiet. Because of our fencing project, I hadn't ridden him since my mom and I rode on Tuesday. This is the longest the horses have ever gone between rides except for my trip to Florida last winter. I expected Pie to be nervous at first, but he wasn't at all. We circled around the maple trees in the front yard and out around the farmhouse. Next, we headed up toward my uncle's barn and near the turnpike. He was a perfect angel, softly blowing and relaxing as we went. As we headed out across the hayfield, a neighbor at the corner of our property was coming out to dump a wheelbarrow. Pie looked at him and the neighbor started talking to us. Pie walked toward him calmly and we met in the field and talked for a few minutes. Pie was so sweet and quiet. Next, we headed back up a hill away from the neighbor and Pie must have been watching him, but no reaction. When we got about 200 yards away, though, all hell broke loose. Pie wheeled around and started snorting and pulled all his energy inward until it felt like I had a tightly coiled spring or firecracker right under me. His head was completely in my lap and his hindquarters were under the saddle. It didn't feel like his feet were on the ground, but we were not moving. YET. I can't explain how awful I felt waiting for a movement from him. He snorted violently. His heart was beating loudly up through my body and I was talking to him and trying to softly urge him forward out of this tight position. I could feel his desire to take off towards the barn. I mentally made a note that I would turn him in a tight circle to stop him if that happened. He kept watching for the neighbor to emerge from the woods with the wheelbarrow. When that happened, Pie snorted and turned a tight circle. Hey, that is my move, I thought. He dropped his head while chomping his teeth and sort of rocked back and forth in a half-rear. He was very distressed. It was terrible. I could not get a forward movement so I dismounted to try to walk him forward toward the barstool away from the barn and the neighbor. Unfortunately, as we crested the hill we discovered that our dear barstool friends had erected a new wooden jungle-gym/swing-set in the entire yard. Pie could not take it! He snorted so loudly I was sure the whole neighborhood would come out to look for a dragon. He was very difficult to walk. I am so much better on a horse than off and I was kicking myself for dismounting. I somehow got him back to the pastures, but I don't think his feet were on the ground at all. I remounted and walked him around inside the ring and all over our old pastures. He walked, but he never came back to me. He was worried and nervous. I mentally wrestled with the question of how much is too much and watched the time on my wristwatch. Pie is seldom trying to be silly when he gets like this. The shot of adrenaline that was pulsing through his body, caused by real fear, was still acting and our walking was slow and steady, but not calm. He still was grinding his teeth nervously without any rein pressure at all. He performed large circles and serpentines perfectly, but arched and upward rather than forward. If someone were watching who was unaware of how a relaxed horse should look, they might think he was trained in advanced dressage. I kept my hand on the buckle and just held onto his mane, yet his head was arched and his teeth were grinding. After twenty minutes of walking like this on my "carousel horse" I dismounted and untacked him and brushed him. He uncharacteristically threw his head up and down in the cross-ties the whole time. How big and wild-eyed he was at this point. Defeated, I took him back out to the pasture for turnout. He wasn't even interested in grazing. I had planned to introduce him to the new pastures by walking around inside of them at the end of our ride, but that didn't happen.
I wonder what I did wrong today. I think I was focused, even when I was talking to the neighbor. Sometimes I just think that I am too much of a human to understand what he sees when he is scared and our bond is too new to trust me completely yet. He has thousands of years of history coursing through his veins telling him to flee and I am this little fly on his back, or worse, standing beside him, telling him that it really is ok. He doesn't even hear me. I feel certain he will hear me one day though, so I will keep trying!
Posted by juliette at 7:00 PM