Who would've thought... it figures 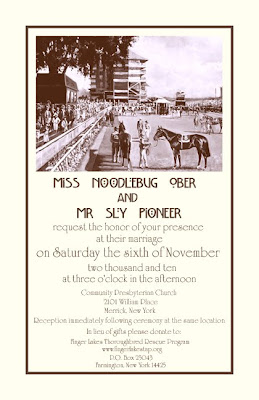 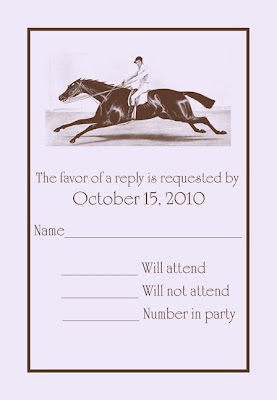 Yes! It is true...Miss Noodlebug and Master Pie - Pie are getting hitched! Ha - that would be an adorable wedding for sure. No, actually I was contacted by an animal lover who is getting married on November 6, 2010, the date of this year's Breeders Cup race. She and her fiance have embraced the Thoroughbred as a symbol for their wedding and found my custom poster site and asked me to design the invitations. They are requesting donations to go to a Thoroughbred rescue organization in lieu of gifts. Isn't that fabulous? I wanted to share the design, so I had Pie and Noodle serve as understudies today.
I spent this week riding everyday. Even though the first part of the week was windy, I had perfect rides each day. I alternated horses and concentrated on staying focused. The boys were amazingly good for me. Yummy rewards of apples from our trees followed. September is the best riding month in Pennsylvania.
The horses have been my best buddies during this "Maizie-goes-to-middle-school" transition period. They cheer me up just when I need it most! On Friday, I won the "Worst Mom of the Year" award and I was chasing my tears away in Pie and Sovey's manes all weekend. Maizie's school had a sixth grade social on Friday. On Thursday afternoon, Maizie spent about an hour deciding on the "perfect" outfit for this event. I was working on my computer as she tried on different clothes and posed in front of the mirror behind me. This is new territory for us - she usually could care less about what she wears so I thought it was very adorable. Her Friday schedule was full of quizzes and a mile run in gym and then the social was to be after school and I was to pick her up at 4:30 pm. She and I checked the school's website for the details. She kept joking that no one but her would be there because there hadn't been any announcements about it. She told all her friends to go too, though, so we both thought she would have a good time. In the afternoon, Brian and I drank iced coffee and reflected back on our own middle school dances and how much fun they were. At 3:15pm, though, Maizie arrived home on the bus! What happened?! Apparently, there was a $2 charge to get into the dance and Maizie didn't have any money. What kind of idiot mother sends her kid to the school dance without a cent in her pocket? That would be me. And, my dear, sweet Maizie-girl is too shy and unassuming to say a word to anyone - she just rode the bus home. I don't know why I didn't think of money. I had a brief thought when she started middle school to stick a $20 bill in her backpack for emergencies, but I forgot to do it. The PTO at her old school paid for so much - they were always taking field trips and having ice cream and pizza parties so I never even thought of it! The website didn't say a thing about admission, but of course, I should have thought of it myself. It just rips at my heartstrings to think about it, even now. Of course, it isn't the end of the world - there will be other mix-ups and disappointments in life, but I just feel like the biggest goofball Mom ever. My own mother tried to make me feel better by saying that maybe there was some reason why Maizie was not supposed to be there. Honestly, a strange thing did happen to us right after Maizie got off the bus. We were all in the kitchen talking about the mix-up. (Of course, I was crying because I felt so bad for Maizie.) We looked out the window and some big high school kid was in the field next to our house trying to pick up Noodlebug!!!! I walked out the front door with tears streaming down my face and stared at him and he ran away! Isn't that weird? So, Maizie and Brian have been trying to make me feel better by saying that if Maizie had been at the dance, Noodlebug would have been "cat-napped"!!! Ugh!
Posted by juliette at 2:10 PM