I guess there's just one thing left for me to do 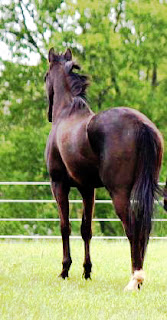 Yesterday morning I rode Foggy for the first time!!!!  He was a perfect angel. I have waited a long time to ride him, mainly because of his weight.  He is still thin, but he has put on some nice pounds with our grass and his coat is sleek and shiny.  Mostly, I knew that any worry he may have had initially about being at our home has vanished.  I like horses to know me long and well enough to be completely confident that I am offering only kindness.  That way, when I introduce something new, like riding, they are happy to see what it is all about.
I groomed him while he grazed.  This is our normal routine. Then, we walked up to the barn and spooked around in there. For the last few weeks, I have been taking Foggy into the barn and getting him used to the cross-ties. He is not at all worried about the cross-ties. Pie cross-ties perfectly, but Sovereign has never stood well in the cross-ties or relaxed in that space. Instead, he stands out in the forebay for tacking. I am happy that Foggy has zero problems in the cross-ties.
Yesterday, though, he stopped in the forebay and just stood there. This is probably not accurate, but it seemed to me like he has observed Sovereign standing there for tacking because he stood in the exact position where Sovey stands. So, I put the lead over his neck and left him there and went into the tackroom and got a saddle pad.  When I returned, Foggy was standing like a statue. I used a thin, quilted pad and two fluffy white fleece pads.  Foggy has high whithers and until he is the correct weight, I can't properly tackle saddle fitting. My saddle was high atop a pile of fluffy pillows, but I didn't care. I knew I was only going to walk him around a little.  I hooked the girth very lightly and popped on the bitless bridle.  I have tacked Foggy up before, but he always seemed nervous after tacking.  This time, he was calm and relaxed.
Foggy is the type of horse that will do anything you want him to do. This sounds like a good thing, but it can be tricky to be sure that he wants to do something. Just because you can make a horse do something doesn't mean the horse is necessarily ready to do that. There is no worry in this camp with Pie. If he is willing, then he is happy and relaxed in his entire body. Sovey also is more demonstrative if he does or doesn't want to do something. Foggy, by contrast, will willingly do anything, but I can tell that sometimes he doesn't really want to do it. I don't want to rush him in anyway so I have to really keep a watch on my own enthusiasm and make sure he is completely ready for the next step.
Yesterday, Foggy was happy to be tacked up so I walked him down and we carried the mounting block around. He is afraid of the mounting block. This is a perfect example of what I mean by his willingness to do anything even if he isn't comfortable. When Pie first arrived, he was terrified of the mounting block. He would snort and back up and let me know with his whole being that he was scared. I used treats to slowly introduce the green, plastic contraption to him and he got over his fear in a few introductions. Foggy is also scared, but he is so slight and less vehement about any fear. He will walk around the scary thing and let me carry it and stand on it, but Foggy really isn't over the fear. Just because I can "force" him to be near it doesn't mean I shouldn't take the same time I did with Pie. So I've been putting treats all over the block and letting Foggy "meet" the monster. Easy horses get the short end of the stick sometimes and I don't want to cheat Foggy out of proper introductions and training.
I had Foggy stand beside the block and easily leaned over and put some weight on the saddle. He is so short compared to the other boys. Then, I got on gently. He stood still and I gave him many "good boys" and a few treats, which he could not believe he could get with a rider on his back! We stood quietly like that for a little bit and then I asked him to walk with a light squeeze. He walked nicely around the ring with his head a little high, but not too worried. The auto-auction was using a loud backhoe and he watched that with interest. As we circled a few times, he lowered his head and relaxed his whole body. I stopped after ten minutes. He walked forward on the dismount.  I remember Pie did this too at first, so I know we can work on that later. All in all, it was a great first "ride"!
Posted by juliette at 7:43 AM