I fell in love with you before the second show 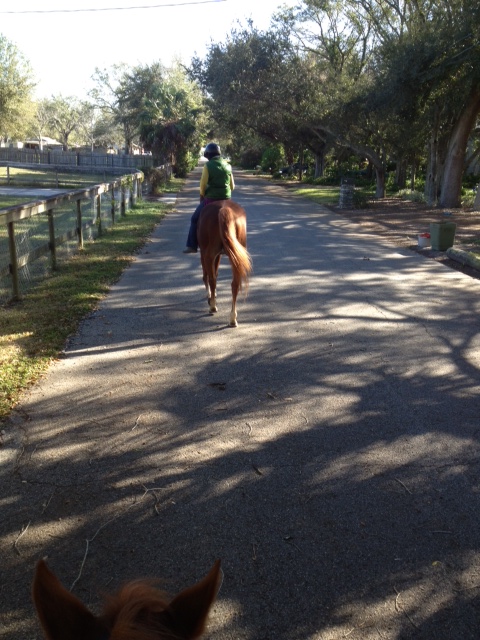 Barb and I made plans to meet at 9 o'clock on Friday for a ride, but the morning arrived windy and chilly. When I heard the wind and felt the bite in the air, I wondered what Chaunson would be like with extra zip. I realize that it wasn't actually cold like at home, but for Florida it was chilly. I wore many layers and even my thin running balaclava under my helmet.

Chaunson was good to groom so I got on and we walked quietly with Barb and Titan toward the parks. As we made our way down a sandy alley, one woman turned out a group of horses. The horses were obviously feeling good in all the wind and cold and started bucking and racing and twisting happily. Chaunson stood and snorted but it didn't seem like he was too upset. The woman said that she was sorry, but I told her not to worry - what are you going to do? It wasn't her fault that we came by at that exact time. Her horses were happy and having a ball and Chaunson puffed a few times, but really kept it together. 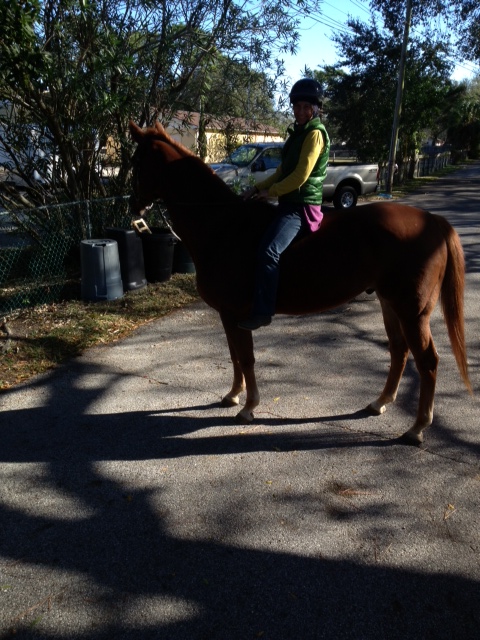 Barb and I took the horses on a new adventure around some neighborhoods where we rode Titan and Max last year. On this crazy windy Friday our quiet horses ignored the whipping flags and flying holiday decorations. Both Chaunson and Titan should win awards for being unflappable. In fact, we were laughing about how Titan never shies and at that second he did a tiny side step when an umbrella in a yard was lifted by the wind. It was a quick bunny step and Barb just laughed because she never sees him shy. Then later we went over a bridge and a huge, white egret flew out from under the canal but Chaunson did nothing. The bird scared me because I had no idea what it was, but Chaunson wasn't worried. What a horse - winning my heart with each ride!
Posted by juliette at 11:06 PM