This is the land that grows around me 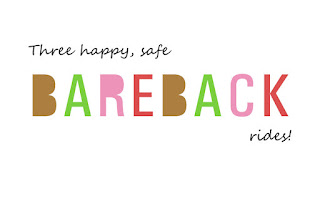 When I arrived at the barn yesterday morning three muddy puppies were waiting to greet me. I had groomed them all perfectly on Monday. I thought they looked wonderful. They said "Thank you, Julie, but we know how to make ourselves even prettier" and then proceeded to roll in the sloppiest mud they could find. They rolled before I pulled away from the barn which is hard to take. You think they could wait until I go home. So, on Tuesday morning this is what I found... 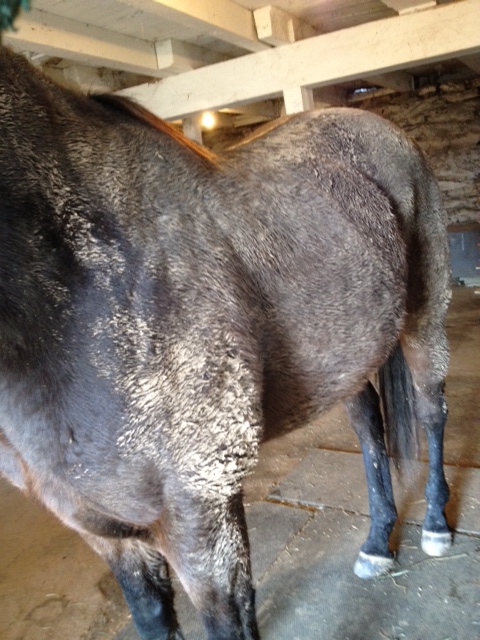 ...and Pie's left eye was swollen. 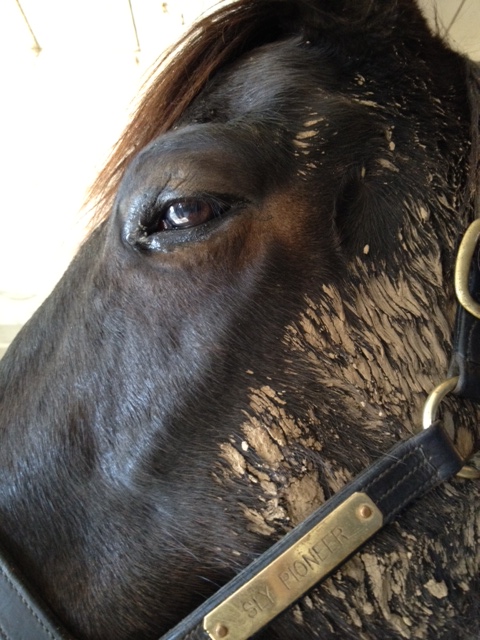 He sure is a squeaky wheel these days! I bathed his eye and was able to determine that the swelling was from a sting or foreign matter (mud?) rather than from an impact injury. I know because it was super itchy and Pie wanted me to rub it for him which he would never do if it was hurt. I would not have ridden him if it was bruised because extra blood flow there would have made it throb. I thought a sting or foreign matter would do well with extra movement - especially adrenaline which I figured we would have for our first ride.

I planned to ride for a very short time, just enough to go through the motions and allow their backs and muscles to become reacquainted to me up there. My body is fit from riding for two months. The boys haven't had a rider in a long time and it seemed unfair to hop on and go for too long.

I probably would have ridden Pie with a saddle under normal, first-day-back conditions to save my own hide, but the sore eye made me feel like he was a little less formidable. I groomed him (which took forever) and slipped on his bitless bridle. I could tell he was animated and happy to be going out. In fact, after I got on, he started walking out toward my mom's house like we were all safe and hadn't missed a beat. I don't like going that way if there is any worry about behavior because it is too close to the road. He was really irked at me that I turned him in another direction. He thinks of my mom's house as a candy store complete with a kind woman who emerges each day to give him apples and carrots. He pulled a few head shakes and neck circles with annoyed squeals and a few small front end lifts. These were not rears and were not dangerous at all under normal conditions, but I had on my winter Bog boots (which were too heavy for our balmy 45 degree day!) and I didn't think I was going to stay on with some of his antics. These Bogs will be perfect for a freezing cold wintery day when I have stirrups, but they were too heavy for bareback. I couldn't feel him or where he was at all so I decided to keep my legs straight out and away from his sides which was nice for him, but that made staying on a bit difficult!

Next, I rode Sovereign and then little Foggy. They were completely wonderful like they always are and the only difficulty was restraining myself to not ride them too far or too long. Again, I like to give their backs, feet, and entire muscle system a chance to slowly get used to me up there on a long walk. All my rides were less than twenty minutes and I used that time to bend around trees, bushes, outbuildings, and houses. I took Sovereign into the woods for a tiny bit and I took Foggy to the turnpike. Each horse had a post ride grazing session of ten minutes ONLY! (I learned my lesson from Sunday!) I will slowly be able to increase the riding time and grazing time each day. I don't like to use a watch at all, but in the beginning of a new program it does help keep them safe from the grass and prevent soreness. Today the farrier comes.
Update: Text from Mom - Pie's eye is perfect again this morning! Hooray!
Posted by juliette at 7:53 AM