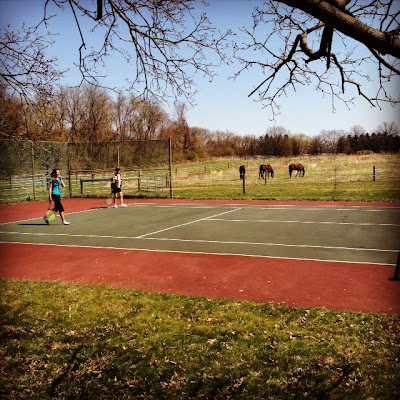 On Sunday we finally had sunny skies and mild temperatures. The whole family hit the court for three sets of doubles with the horses grazing in the nearby pastures. Maizie had her music playing (which thankfully is our music too - poor honey - we brainwashed her into liking our music before she was five so she doesn't know anything else!) and the birds were singing and the flowers were blooming and the horses were munching. It doesn't get better than this for me. After the tennis, I had a great ride around the farm on Foggy.

There probably isn't a horse or breed of horse who is actually "safe" for non-riders to hop on anytime, but very occasionally, I do wish my horses were a little more beginner-friendly. When I decided to get back into horses in 2007, I told my mom that this time round I would like to have a gelding, preferably a slow, calm, quiet horse (does this exist?). I do not believe geldings are inherently quieter than mares. Our last three horses had been mares and I just wanted to have a gelding. One thing I distinctly remember saying was, "No more Thoroughbreds!" 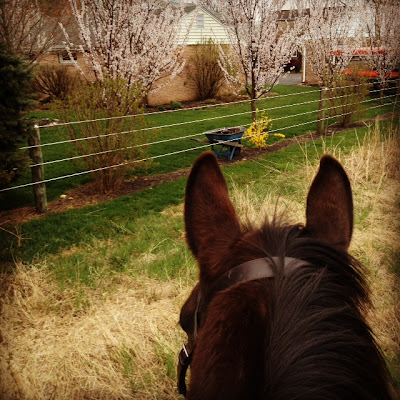 Hmmm...well, I got the gelding part right!

His rushing requires circles and serpentines. I can get him to walk on a very long rein and he appears to be calm, but it is all an act. He is actually extending and dropping his head because of my body position, but there is no calm snort from him. He never relaxes completely. In fact, just the opposite - if I stop concentrating for a split second, his head comes back into my lap, he starts to jig or full trot and his sheath makes the worried gelding noises as he races around. Then, I regroup my brain, re-position my body, give him all the reins, and he pretends to calm down by dropping his head and lengthening his neck.

I don't know what is going on, but over the years, other things have thrown Sovey out of balance and we always work it out. We had times when his bridle bothered him so I rode him in a halter for months. He had issues with the saddle so I still ride him bareback mostly. He demonstrated that he hates the cross-ties although he allowed them for the first six months. Now, he stands untied in the forebay without moving a muscle for tacking. This new worrying glitch seems to be external (deer on his land?) but I'll probably figure it out eventually. Sovereign is a great communicator. He'll show me with such tenacity and verve until I finally understand what he is saying - in spite of my being a dumb human.

I rarely think of my horses as "difficult" to ride; they seem so sensible and happy and sweet to me. But, if I look at it from another person's perspective, my horses probably are not completely easy. They are very aware of their surroundings. You can't go to sleep for one second because they will test you. They make me think. They make me ride well. And family and friends can't safely hop on for a quick ride unless I am on the ground leading.

But the upside of having three Thoroughbreds is that the challenge of every ride keeps it fresh. I can't imagine a time when a ride or a grooming session could be dull. My mind can't wander too far while I am with them and that time of constant focus is not tiring or exhausting. Instead it is meditative. There is no room in my brain for boredom or worry or creativity. It just is right now. I think my brain seems empty then, like I am in between conscious and unconscious thought. When I am in that space there is only joy. My horses walk out - they actually seem to strut - they do not dawdle or race nervously - they glide in the most alert, perceptive, interested walk that just makes my heart sing! No Thoroughbreds? What in the world was I thinking? 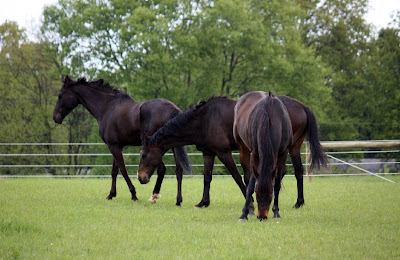