it was electric, so frantically hectic, and the band started leaving, 'cause they all stopped breathing 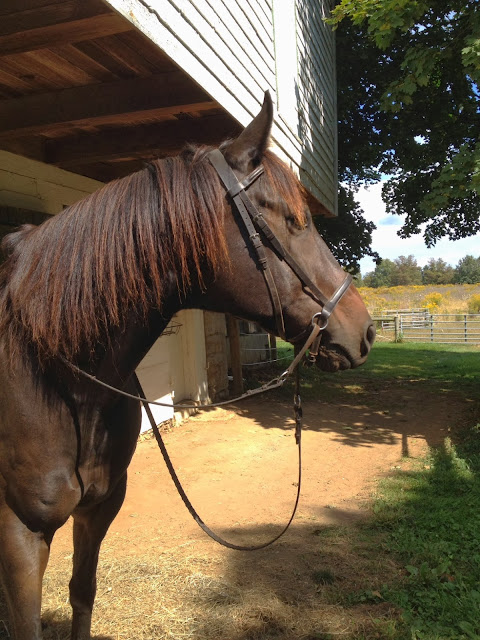 Yesterday morning I got to the barn early to ride. The light was perfect and the temperatures were hovering around 47 degrees - much colder than it's been. Everyone was covered in mud from our previous day's rain. In the neighborhood beside our farm a man was using a jack hammer on the concrete of a front porch. The boys were all snorty and spooky on their way into the barn.

Pie was making himself extra tall and snorted through our entire grooming session so I decided to use the saddle. As soon as I mounted, he calmed down which I thought was exceptionally kind of him. I didn't expect that. In fact, we rode for an hour in the woods and over to the mechanic's apple tree and back around our perimeter trail and I don't think he shied once. In the last bit we had to pass fairly close to the jack hammering. I could feel the reverberations through the ground and up through Pie, but he stayed calm.

As we were finishing the loop back through the field the morning sun was lovely and a neighborhood friend waved at me from a long way off. It was a perfect single instance to take stock of how lucky I am. I sure felt blessed at that moment. 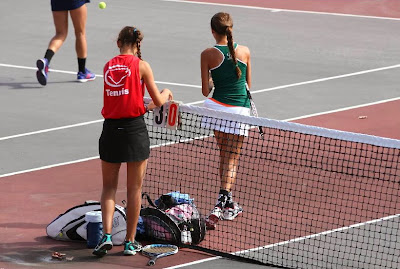 I groomed and grazed the other two boys then stuck all three back outside quickly so I could hurry over to Maizie's tennis tournament. She finished her regular season undefeated (16-0) and was playing in the finals of the singles #3 for the conference title. She was the top seed and had won her quarterfinals and semis easily. 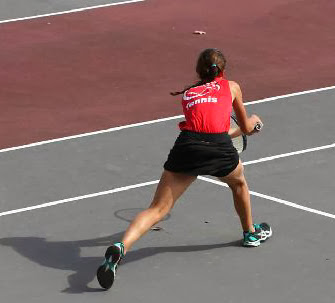 But sweet Maizie lost in the finals 7-5, 6-0 to a girl she beat during the regular season. This was Maizie's first loss as a high school player so there were a few tears in our house last night. Poor honey, these life lessons are hard but so necessary.

The upside is that already it seems more real, more relaxed around here. Since August 12th we've been tight and strained, precariously balancing on a bubble of perfection. Every win just made that bubble more taut. At the barn with the horses, and on the running trail, I've been able to exhale, but at home and at matches I think we've all been holding our collective breath for eight weeks. Yesterday evening I was able to breathe and I slept very good last night.

Maizie was more at ease as we walked to the school bus this morning. She has to play the very same girl in Districts on Thursday. It is just dumb luck that it worked out that way and I don't think Maizie is looking forward to it at all. My goal is to keep smiles and laughter flowing the next few days. Happy is the safest emotion I know to bring when I climb back on a scary horse.
Posted by juliette at 7:39 AM