beneath the blue suburban skies 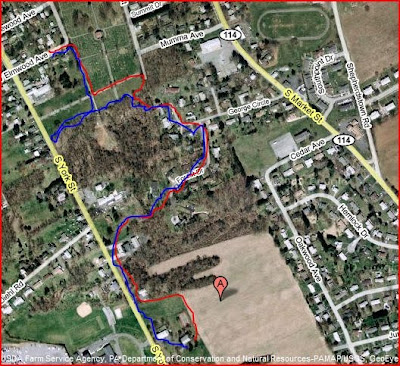 Today's ride was so much fun that I just had to include a map. Pie and I basically followed the same route that we did on my virtual ride in July. Click here for that post. The only difference is that we went deeper into town today. We actually visited a friend. I used a red line to draw our route on the way out and a blue one on the way back. (Our farm is at "A".) I hope it isn't too small to see. (I think you can click on it to enlarge.) I had a blast and it seemed like Pie did too. Sovey was happily munching grass when we returned, so I don't believe he minded being left behind. I really do wish I could ride Roman!!! One new obstacle today was a splintered tree that was hanging from high over our heads and completely blocking the Forest Drive cinder path. I didn't think Pie was brave enough to sneak through the skinny opening. I knew he could physically fit, but I never thought he would allow such a stunt. He walked right up and was almost through before he knew it. Then, STOP!!!! Snort, snort, back, back, snort. I laughed and coaxed with my legs just a tiny bit. I reached forward and stroked his neck and he walked through the opening. I tried not to think about how we would ever get back!!!! We visited Cletus' house and his Dad gave Pie an apple. Then, off through the cemetery. A man was cutting the grass and we tried to avoid him because I am sure he would tell us to get out of there. I keep Pie on the roads at all times in there, but still, I am sure that no one wants a horse in there. Cemeteries and golf courses always look like the most beautiful places in the world to ride to me, but I think I am alone in that (at least to non-riders). Still, I am always careful to be respectful. When we visited my friend on Elmwood Avenue, Pie left a "present" in the street. (I was sure to drive back later and clean it up, as I always do.) Then, back through "Sunnyland" to the Forest Drive trail. Pie had zero problems with the splintered tree on the return trip. He is amazing!
Later in the afternoon, I had shavings delivered and Brian and I briefly covered them with a blue tarp until a friend was able to come and push them into the wagonshed. Pie and Sovey were in the pasture and Pie was snorting and Sovey got the hiccups. They were very annoyed at the tarp. Mom and I walked Pie slowly into the barn by the tarp. He snorted and, as usual, decided that it was much safer to walk on my feet then his own. I remarked to Mom that I am really better able to calm a horse when I am on their back than on the ground. She agreed that she is too. Of course, Mr. Sovereign came into the barn with barely a sideways glance at the tarp. His hiccups were over and he was the perfect angel we know and love. 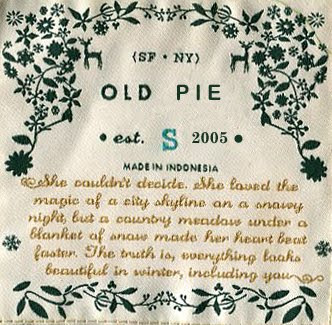