a bustle in your hedgerow 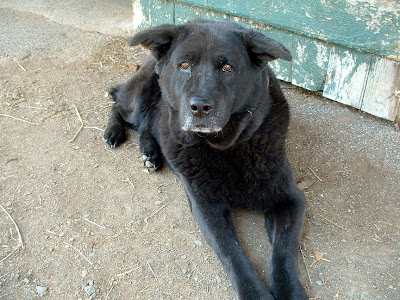 I have been so lucky to have amazing rides this week in spite of one naughty puppy named Eby Lee. She is in the photo above, looking like a dusty barn dog after rolling in the dirt. I thought I would feature Eby today, since this week she managed to cause me to fly through the air above the saddle of one Pie-Pie boy. I did land back in the saddle, (just lucky) and did not actually "fall off", but I certainly wasn't with my horse. Eby causes many upsets in our horse world, but we love her to bits, so it is only fair that I tell her story.
As you can see by her white muzzle, Eby is hardly a puppy. "Puppy" is my favorite term of endearment for horse, husband, daughter, kitty. Pie and Sovey are my "puppy-ponies", Maizie is my "puppy-pumpkin-girl", Noodlebug is my "puppy-kitty". You get the idea. So Eby is not a true puppy. We estimate that she is 11 years old. She was a stray who made her appearance at our barn when Maizie was just a year old. Our barn has been a magnet for stray dogs and cats over the years. We always try to find the owners, but usually end up with a lifelong pet when it is all said and done. We phoned the nearby Humane Society when Eby arrived. They told us that one morning that week, before they opened, a car drove up and the people threw a Lab/Chow mix out the window and drove off. The Humane Society workers tried their best to catch her, but no luck. Our farm is close and the dog obviously made her way to us. She lived on manure and apples until we managed to convince her to trust us. Mom named her "Ebony" after the dark, strong wood. Mom always spells her nickname like this - "Eby", which makes Brian laugh because he thinks it should have another "b" so he calls Eby "EEE-BEE".
One of the things I love most about my family is how much they adore animals. When Eby arrived my grandmother was still living and she and my parents all lived on our farm. Eby was immediately welcomed and became part of the entire menagerie. She spent her days walking between their two houses enjoying snacks and back scratches. Maizie was just learning to talk so my parents' names, John and Sandy, were never learned. Instead they became "Grandma Eby and Pap-Pap Eby". My mom is still Grandma Eby. I told that to someone once and you could see their disdain - named after a dog. But, to us, animals are what it is all about.
Eby was very ill-behaved right out of the box. She would jump up on our horses and bite our shoes and cross-country skis. I had to work with her on a leash for a few months to teach her to not jump up on people or horses. In addition, her Chow nature is defensive and is constantly fighting her Labrador nature. She wants to be nice, but she can only be nice to us, her family. We tell everyone who visits to not look at her and it usually works out ok. If you are a stranger and you look at her even one time, she will bark at you for your whole visit. If you don't make eye contact, she will ignore you or curl up on your feet. She is mellowing in her old age. 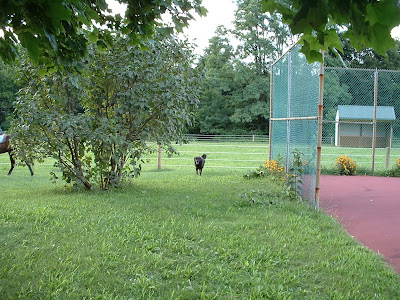 Above is a view I see most days. A black spot with a round donut-shaped tail, lurking around the farm. Pie and Sovey are fairly used to her antics, but this past week, Eby was especially troublesome. Mom and I rode on Sunday and Eby was in and out of the woods chasing squirrels and rabbits. Pie was jumping this way and that as Eby spooked around the trails. On the other days of the week I alternated riding each horse. Eby was underfoot around the barn and in the woods causing jumps and flighty behavior in both Pie and Sovereign. Everything culminated at the end of the week. Brian was working at my grandmother's house and Eby was hovering around Maizie's playhouse. Pie and I walked by and the next thing I knew Pie was bolting down the hill. We turned around to see the siding ripped off the playhouse, but no Eby. At that point, I didn't know what Pie had seen. All the action was behind me, but I knew that the siding hadn't been ripped off the first time we walked by. I mentioned it to Brian, but he didn't know anything about it. Next, Pie and I walked around a different direction and all of a sudden he flew into a rear/jump/slide/buck maneuver. I was in the air with my face contorted and the reins flying, but I did manage to land in the saddle. Pie wheeled around at the end of it all, snorting with his heart beating. Out from under a bush comes the black licorice stick with her donut tail looking like she did nothing wrong. There are huge divots in the grass now where this happened so I know it was bad. I rode Pie out around the farm and he did finally calm down. I was really proud of him for pulling it together. At one point, we even met up with my mom's cousin, Rob, who was cleaning the boat that had given Pie some problems earlier this summer. Pie loved stopping to visit with Rob even though Rob was on the deck of the boat and eye level with us. Pie was genuinely unaffected by the boat. When we returned we walked by the playhouse and now the siding was back on! I was beginning to think that I was losing it. At this point, Eby was down by the barn and she was scurrying around the chicken coop. I dismounted, untacked and was grazing Pie when I heard this huge commotion. Eby was barking furiously at the bottom of the chicken coop (empty - no chickens) and she started ripping the wood siding off the building and spitting it out and then ripping more!! Sovey, in the paddock, and Pie, with me, both started jumping around. What was going on?!? It ends up that some animal must have made its way from under the playhouse to the chicken coop and she was stalking it. Apparently, she had ripped the aluminum siding off the playhouse earlier, causing Pie to shy. Then, when I was gone Brian fixed the siding. Next, Eby decided to rip the chicken coop apart to get to the animal. She never did get it. She is nutty sometimes! I do think she gives me many opportunities to practice my composure with Pie and Sovey. Even today, Eby tested us. I started this post this morning and now, just returned from a fabulous ride on Sovey. Eby was out in the fields with us, peeking out from the hedgerows at every turn. Sovey knows what she is about. We all love her, though, especially Maizie. Here is a cute picture of the two of them on the trails last January. 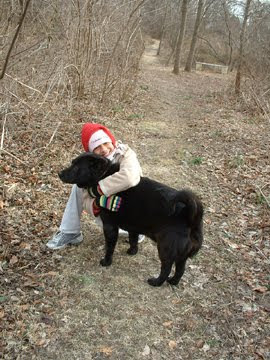