Let's go living in the past 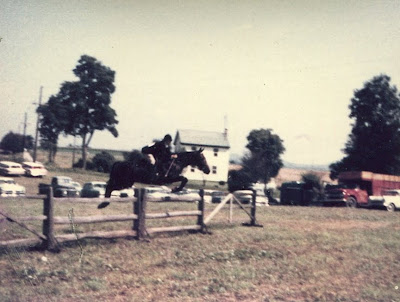 Above is a picture of my mom jumping the horse "Prize List" on the outside course at a local horse show sometime around 1959. Below is Mom and Dan, a friend from the barn where she rode. Dig Dan's cigarette! Very James Dean in the days before smoking was passé. Poor horsey pie - hot ashes - ouch! 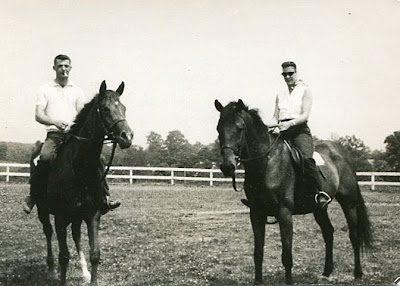 Mom had a circle of friends from the barn she would see often over the years. As a kid, I remember spending a ton of time hanging out with them and hearing all their old horse stories. Every October, the Pennsylvania National Horse Show was held in Harrisburg and my mom's whole barn gang would reassemble for a week of horse watching, and like old army buddies, would tell their "war stories". Ann, Joyce, Mary, Terry (Mary's daughter), Dolly, Maxine and my mom would laugh and tell me about all the horses they rode and loved. Understandably, Maxine could only pop in occasionally, because she was busy schooling her son, Greg, who went on to become the Greg Best, (two-silver-medals-at-Seoul-Greg-Best). It was a rowdy bunch with many funny stories of their time with horses. All these years later, Mary, Terry, Dolly and Mom are the ones left telling the tales, and now, Mom has new adventures to share about her rides on Sovereign.
On Saturday Mary and Terry came to our farm to meet Pie and Sovereign and Terry and I had an amazing ride all over the farm! Terry is a wonderful rider and I was so excited for her to see the boys and ride with me. Terry's passion is jumping out of airplanes - she is a certified instructor - so I knew she wouldn't hesitate to join me for a ride! It had been so windy in the morning, but the wind quieted just as we started out. We had such a great time. The trails were golden and the sun was shining. Pie and Sovey were two characters. I think Terry liked their personalities. We enjoyed our barstool apples which Terry thought was adorable. A neighbor was cutting the grass and Sovey jumped and cantered a few strides. Pie jumped and I was hanging off the side, laughing, thinking, "oh well, here I go", but I managed to stay on. I was on bareback and was lucky Pie didn't throw in a buck for good measure or I would have been off for sure! That was the only ripple in our perfect November ride. Even so, we agreed that, for Thoroughbreds, Pie and Sovereign are fairly bombproof. I told her that I always dreamed of having a police horse, like Mike, the retired police horse that her mom, Mary, had as a girl. "He wasn't afraid of anything," I said, and then we said, in unison, "except for ELEPHANTS!" We both started laughing as we remembered the "Mike and the elephant" story we had heard a thousand times. Apparently, our moms would ride Mike all over the town double bareback because Mike was so trustworthy. As a retired police horse he never shied at anything - until the infamous day when he saw an elephant at the ballfield when a traveling circus had come to town! He took off with the two of them hanging on for their lives. They somehow got Mike to stop, and they still tell that story as if it was yesterday.
As we were grazing, Terry remarked that as she was driving up for Thanksgiving from northern Virginia she saw horses in the fields and wondered if she would ever ride again. Never did she imagine that she would ride on the weekend! She mused how much fun it was just to groom and tack up and ride through the woods and fields rather than all the other "stuff" we used to do as horse show people. This is my experience and opinion exactly. I spent so many years lunging and schooling and jumping, and honestly, I was always waiting for the time when the lesson was over and I was free to do the cool down on the cross-country course. At 42 years old, I am so thankful that I am no longer in that old "horse show" routine. I ride now to share the light, the trees, the trails with my horse. Everybody has to do what thrills them, and that thrills me. 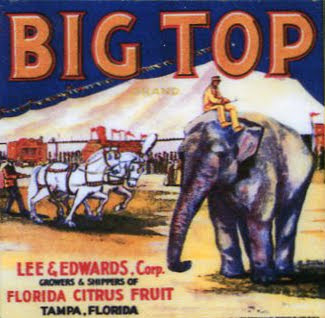