what I want to know is are you kind? 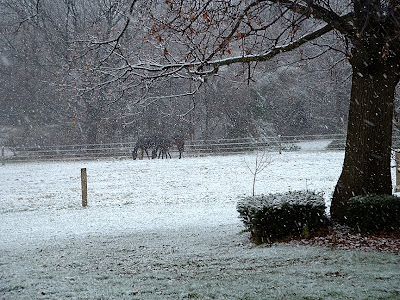 This snowy picture is from Saturday morning. The boys are barely visible in the pasture. Brian and I planned to ride thinking it would be very picturesque, but I soon discovered it was nothing but rain in snow's clothing. I told him that I would never ask him to ride with me during a rain storm so we postponed our snow ride for a "real" snow day! 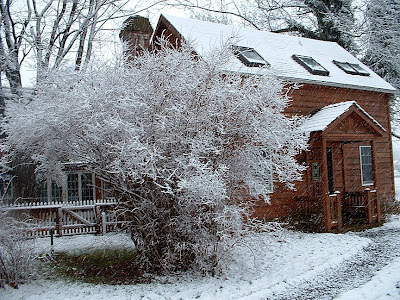 Above is our little house, "Nutmeg Cottage" in the same Saturday morning snow. 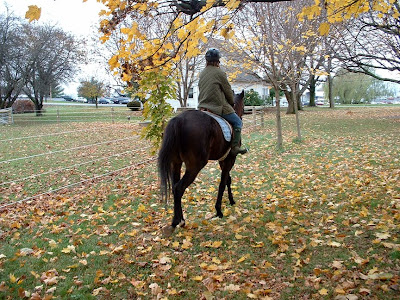 I rode Sovereign this morning and we had a lovely time, other than the fact that I was freezing! All my blogging friends are dressing smart for winter riding, but I was not dressed properly. It was 31 degrees, which isn't so bad for December 7th, but it was overcast and penetrating and I was cold.
When we finished, I grazed Sovey and philosophized about my "problem" with being "too nice" to animals. Twice last week, I was told that I am too nice. Last Wednesday, my farrier trimmed the boys. My farrier is quiet and kind, but he is admittedly partial to Quarter Horses. He doesn't understand what I see in Thoroughbreds. I can't really explain it to him, so we muddle forward with our monthly appointments. Pie and Sovey stand well, but it is apparent to me and to my farrier that they are antsy within their bodies. My farrier slowly and calmly tells me stories about shoeing horses and I hold each horse on a lead. They stand and submit to him with little fidgeting, but I know that they are wound up inside and wish he would hurry. I try to calm them, and I think I am very successful, but they are not asleep like a Quarter Horse might be. They hold their legs for him, but I don't think they want to be there one second more than they have to. When they are finished I walk them into the stall. On Wednesday, Pie had had just about enough of being good. He walked into his stall and calmly turned around. He lowered his head and I slipped off his halter and I walked out of the door and...then...he reached forward and bit my arm. To say I was stunned is putting it mildly. Here is the part about me being too kind. I don't know what is wrong with me, but I was born without the knee-jerk reaction of hitting or slapping. I don't stop myself - it just never comes. I can't do it because it just doesn't happen. I never react that way and I never have. I think I would be ok, morally, with performing a slap across the chest of a horse that just bit me, but I can't do it. It doesn't "happen" naturally. I just stared at Pie in disbelief. He backed up and I shut the stall door. My farrier said, "You are too nice. You have to show him who is boss here." Now, I agree with his assessment to a point. I agree that horses are looking for a person who they can trust to lead them through difficult and scary situations and that person can't be wimpy or weak. But, I have a problem with the hitting part. I don't actually believe that would convey my strength. If anything, I think that would make me look little, especially the way I would do it because it isn't me. I would be a fake. I just can't muster enough anger to hit. I am not proud of this fact. It just is.
Now, stop there, and fast forward the same idea to the next day. My father-in-law has started keeping chickens. He has 4 hens and 2 roosters. He asked me to take a few photos of them for his Christmas cards this year. I got a few good shots and one of the hens befriended me. She doesn't seem particularly bright, but she was sweet and friendly and kept "snuggling" up to me. Well, "Big-Man-on-Campus-Rooster" was having none of this. He started attacking me (I guess it is called flogging in chicken circles). He was really driving me into a corner with his jabbing and flying. My father-in-law was yelling, "Kick him," in between his hysterical, doubled-over fits of laughter. Again, the "kick him" reflex was absent. I just could not kick that rooster. I made my way over to a stick and sort of held him at bay. I walked to the gate and got out. It just seemed ridiculous to kick the rooster. My father-in-law said, "You are too nice". 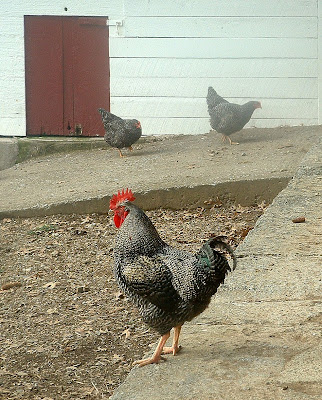 Now, is this true? Am I really too nice? I have a very strong disposition. I am occasionally "bullied" by aggressive people, but I only take so much, and then I am definitely not "nice". I can be a real bitty, if pushed, I think. So what is this all about with animals? My father-in-law claims that the rooster would never do that to him. And, I know my farrier would say that Pie would never do that to him ever again. I don't know if Pie would bite me again, but I admit that I did nothing to tell him that the behaviour was unacceptable. I am not sure what I should have done.
I was thinking about all of this as I was freezing, grazing Sovereign, after our fabulous December 7th ride. I only walked and did not lunge or do anything to make sure Sovey was calm. We rode without a bit all around our farm. I believe that both horses are good for me under saddle because they do trust me and they do think I am a strong leader. They both put an enormous amount of trust in me, if you add up all we have done so far. I suppose it could be argued that that old rooster doesn't think too much of me, but is it true, can you be too kind?
Posted by juliette at 2:34 PM