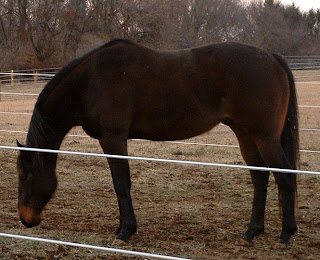 My sweet Pie is a little chubby this spring.  I was grateful for the extra layer he acquired because it helped me worry less on cold nights this winter.  Now is the time to begin a tiny, little exercise program to lift that belly before our spring grasses sprout their lush heads.
Thursday, I went to the barn in the morning with every intention of riding Pie, but I wasn't dressed right. It had been 40 degrees on Wednesday when I rode Sovey, so on Thursday morning I wore the same amount of layers. After grooming and grazing Foggy, followed by some animated manure cleanup, it became apparent that I was freezing.
I went home and tried to get inspired to come back in the afternoon to ride my chubby boy.  It was sunny with very little wind, but it was 25 degrees and not supposed to get much warmer. What tricks do you use to get yourself up and moving and riding when all you really want to do is climb under a blanket and read blogs?  Sometimes I go running, but then I have to ride fairly soon after or my body temperature drops back to normal.  Sometimes I take a bath. Thursday, Brian had just got back from his run so we sat down to yummy cups of hot, creamy coffee. 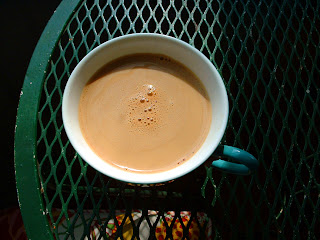 I never drank coffee until 2007.  I had grown up drinking Carnation Instant Breakfast and kept that sugary habit well into my 40th year.  I loved their eggnog and coffee flavors back in the day, but they were bought out by Nestle and flavors were changed and dropped and ruined, so in the fall of 2007 I started experimenting with coffee.  Brian drank it every morning and it smelled so good when he would grind it, so I gave it a whirl.
My dear friend, Susie, says that my coffee shouldn't be called coffee.  It is something else - a little more decadent.  Whatever it is, it gets me out the door on cold mornings and sometimes a second lunchtime cup can get me back out again if I need the extra push.  That is exactly what I needed on Thursday. 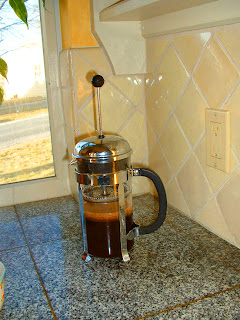 I use a French press with one tablespoon of coffee to one (8 oz) cup of boiling water. I press it right away without letting it wait for the recommended time.  My coffee isn't strong, obviously, but it does the trick! 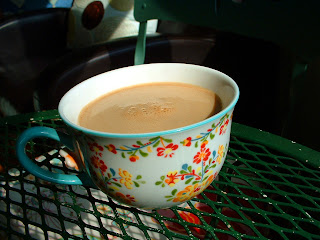 UPDATE: WE ARE VEGAN NOW but this sadly was written before I was enlightened. I am so sorry to all the dairy cow mamas and babies because of my use of cream and other dairy products. Thank goodness I am enlightened now.
I add 1 to 2 tablespoons of cream. I use real cream. I do not believe in our country's fear of fat (sugar scares me more), but I do make sure my cream just says "cream" in the ingredients.  I don't like other junk in my cream.  Each delicious cup of hot, perfectness has 50 or 100 calories depending on whether I use 1 tablespoon of cream or two. Coffee tastes better in my favorite cup from Anthropologie.
So, I was finally warmed up and ready to ride!  I went back to the barn and Pie and I headed out around the trails and fields bareback.  He was just wonderful and I encouraged him to walk out with a little more energy. I knew that I wanted to make him push, but I rode bareback to keep it light and interesting for him.
Then, yesterday, I gave Sovereign a break from riding and only groomed him and grazed him and loved him up. I decided to ride Pie again, this time with a saddle and mixing in a tiny bit of trotting to help pull that belly up. I don't trot Pie all that often.  Pie is a lovely mover.  His trot is fluid and easy to ride, with a saddle or bareback, sitting or posting.  He looks amazing from the side when he trots, but straight-on, you can see that he wings with his right front. He was apparently born with some sort of anatomical problem on that right front.  The hoof grows out with a pronounced flare.  He was never raced because he bowed that tendon early in his training. He just isn't put together correctly there, which probably caused the bow.  My barefoot trimmer has tried a different method to prevent that flare from growing out so quickly.  It is working because the hoof looks pretty normal right now, six weeks out.
Pie always breaks into a canter when playing with the brothers long before they do. We joke that Pie is so lazy and cantering is the easier gate.  I think there is some truth to that with Pie, but I also think his right foot/tendon bothers him while trotting. Because of this, I gave him a long walking warm-up, and only planned to trot a tiny bit.
Just as we were really getting started at the trot, a low flying plane began circling us. The plane was noisy and scary, but Pie kept it together.  The plane's shadow, which followed a few moments after every pass, scared Pie the most. I was really annoyed, but proud of Pie for not freaking out.  I called it a day and walked him around our property.  He was like a docile teddy bear, which tells me just how out of shape he is because we didn't trot all that long. I will continue to keep his trotting sessions very short, even without that annoying plane.
I don't know who rode or trained Pie before I got him. All I can say is that I have never ridden a horse as responsive as Pie.  Because the trot is a little faster than the walk, I am surprised and in constant awe of how quickly he listens to even a slight signal.  He circles full and round. Actually, he is amazing. I notice this when I open gates to lead him through. He moves his back end out of the way instinctively, calmly and round, not nervously. That is how he moves at the trot in circles and figure eights. Could he have these responses naturally or did someone teach him?
Posted by juliette at 7:47 AM