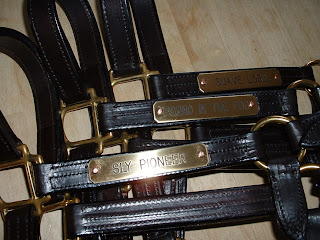 I bought these halters from Pinkston's Turf Goods for the horses in January. They each have a brass nameplate with copper rivets.  I really like them, although I thought they were a little heavy for the sweet, tiny Foggy head, so I had them make me a custom one for him with thinner, lighter leather.  Everyone here laughed at me.  It ends up that he is doing fine in the one that is 7 ounces "heavier" as well as the light one.  Our horses are only in their halters when we are leading them or grazing or tacking up.  The rest of the time they are nakie boys.  I also bought the fleece sets for the halters in hunter green.
I mention the halters, specifically, because yesterday I ended up riding Sovey all over our farm in just his halter.  This was not my original plan, but after some serious detective work, it became apparent to me that Sovey might not like his bitless bridle.
I spend much of my time striving to make Sovereign happy and yet his preferences still remain a mystery. I am going to have a traveling equine dentist visit us this spring to start the process of ruling out physical problems. I am keeping my eyes open looking for ulcer symptoms and/or anything else that might be happening. I know Foggy's introduction is a change, but Sovey's attitude is very similar to what it always has been - unpredictable.
The last few rides on Sovey I have ridden bareback.  This is because I thought the saddle and girth might be hurting him. This is my third spring with him and when he is shedding, he is extremely sensitive to the touch.  I don't know if his hair tickles him or if something else is going on, but I decided that the saddle pad, saddle and girth might not be so great.
He told me in no uncertain terms that I was wrong about that guess. I should have noticed when I was tacking up last week. He stood perfectly for the saddle, but made faces when I came out with the bridle. It didn't register that it was the bridle.
Yesterday, I got on bareback and started out south. Sovey would not cross the driveway to go.  He planted himself and light squeezing only caused him to plaster his ears and make a horrid face. I still thought it was his sides or back or something around the saddle area. I hopped off and encouraged him to walk down toward the farmhouse with me. He was angry and reluctant. I wondered, do horses get headaches?  That is what he reminded me of - me with a headache. 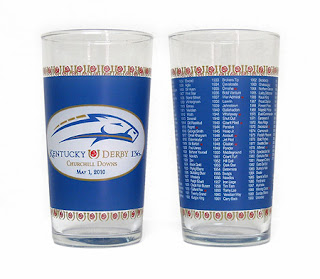 We have these Kentucky Derby glasses from last year.  Every time Brian uses them he holds it up and says, "Sovey" because this is what he looks like when he is mad.  There are many things that causes this face but I usually see it when I am not understanding something he is trying to "tell" me. Sovereign is an excellent communicator. In the people world, I fashion myself to be a little like my hero, Nancy Drew. I think I am so perceptive. Ha! Sovereign would tell you otherwise. We spend much of our time together with him telling me "Timmy's in the well".  It takes me so long to figure out who is Timmy, and where is the well. Most of his conversations are not about pain. For example, he "told" me I left a gate to the far pasture shut the other day by walking down there and repeatedly pointing to it with his muzzle. He also "told" me that I forgot to fill his snack bucket (I had!) in the paddock when I rode Pie on Tuesday by uncharacteristically nickering softly. If I ask him to, he kindly moves the horses around for me so I can open gates. The first year he was with us, he clearly showed me that he would rather stand in the forebay for tacking.
So yesterday, I was having a tough time deciding what was bothering him. The farmhouse just had a water line dug and the dirt-filled trench has been making him nervous. I thought it was a good opportunity, since I was on the ground anyway at this point, to work through that fear.  He was excellent about it and we successfully conquered the trench and the new fire pit at the farmhouse.  Still, though, he was mad.
I re-mounted bareback and attempted to go east.  Nope.  More ear pinning.  He walked around the paddock and then would not take another step.  I was really confused because it was so uncharacteristic of him to balk, so I slid off, slipped the bridle off, and turned him out in the big pasture so I could think.
Just then, I remembered how he made an ugly face when I brought the bridle out of the tackroom.  I decided that I would try to tack up with a saddle and only ride in a halter.  If he still was acting unusual, I would quit and get the vet to check him out.

I tacked him up with the saddle only and hooked two thin nylon leads to his halter.  I got on and asked him to go south toward the farmhouse.  Happy, forward ears!  He walked down there and over the trench.  Good boy!  He walked up and around and toward the turnpike.  We meandered down this way and that.  He was happy and sweet.  We walked all around the perimeter.  When he wanted to go in a direction different than I did, I circled him until he went my way. More "Good Boy" pats. Squeezing did not cause any ear pinning. The wind had picked up and it went through my brain for a split second that I had lost my mind.  What the heck was I doing out here in this crazy bad wind on him in just a halter?  I immediately let go of that thought because I had to get home safely so we continued on.  Sovey was just wonderful.

I had ridden him before in just a halter, but that ride was in the summer and I stayed in the pastures that day.  I was so intent on figuring out what his problem was yesterday, that I forgot what I was doing in terms of safety.

It worked out well anyway.  I don't know if the bridle is pinching him or pulling on his long winter chin hairs.  I don't even know if it is the bridle at all.  Maybe he was good in the halter because it was something new and exciting.  I am still going to watch him and see what is going on.  Sovereign is one horse I can't figure out. That makes him all the more endearing to me. 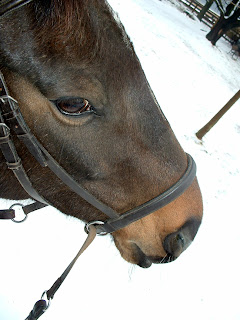 Update:  I just ordered U-Gard for him.  I am thinking this might be a spring flare up thing he experiences.  We will see!
Posted by juliette at 7:18 AM