You can be my partner in crime 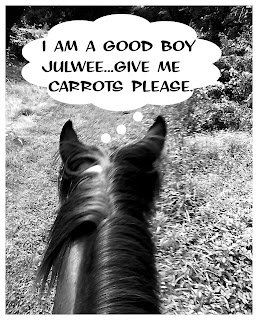 Today was one of those days when Pie needed to be ridden, but the weather was not right for a Pie ride.  We had sustained high winds and the leaves and branches were whipping around with great force.  The wind was the kind that is noisy and it makes the adrenaline flow even in humans when it whistles.  I do not believe in sticking to a riding schedule without listening to the weather.  I also don't believe in being in danger when riding.  I am not a thrill seeker in the least - in fact, quite the opposite.  I am a serious chicken when it comes to danger.  But, I ended up riding Pie and he was fabulous and we had a safe ride.
I started out just grazing him and grooming while he munched. I had ridden Sovey yesterday and Foggy the day before and Pie was in need of some exercise.  He gets weird when he isn't ridden consistently.  I can't tell if he is jealous if I ride the other boys or just overfed, but he isn't a nice pasture mate if he goes too many days without his riding time.  He is pushy with the brothers and even pushy with me on a lead when he gets like this. Grazing was nearly impossible today. The wind was crazy-nutty and Sovey was in a nearby pasture racing around making it obvious that riding anyone would be stupid. A little note here about Sovey racing around. Sovey is one smart cookie and most days he is a quiet boy. BUT, if there is any sort of "situation" that he perceives as "dicey" he works it for all it is worth. He is the prisoner in the yard that incites an incident in order to escape. He never breaks a sweat like if he were actually worried about something.  He is very good at starting a riot. Funny guy.
Anyway, Sovey was running about encouraging Foggy to join in. Pie was jumping and shying at every leaf that hit him like a missile, which were many, so I flew my Pie kite in the direction of the barn and stuck him, and then the other boys, into their stalls. Now what? Why did I want to ride Pie, I wondered. What was the point? To be honest, I felt sorry for him. I personally know what it is like to have pent up energy and how great it feels after exercise.
So, after a few minutes of quiet down time with hay, I got Pie into the cross ties and resumed grooming and hoof picking. I told myself that tacking up would be good for him as far as attention from me and riding doesn't have to ever occur. I walked him outside and the wind hit us like a ton of bricks. We trotted and pranced down to the mounting block and a huge gust blew a million dry leaves across the tennis court and Pie went into orbit. Again, I questioned my reasons for continuing and again, I told myself that me just standing on the mounting block would be good practice for him. It would keep him focused because grooming and grazing just wasn't enough. So we practiced the mount with many wiggles and shies. And, then, Pie stood still and calm and I slowly got on. Well done, Pie!
I walked him in small circles and serpentines until I heard his calm snort, muffled under all the wind noise. My mom appeared at that moment and opened an outside gate so we could head out to the field. He thought he might graze but I said "no" to that straightaway - I didn't need to have a horse with no reins in that wind. (I've been through the desert on a horse with no reins  - sorry, bad joke.)
We walked on and I kept him balanced between my hands and seat and calves for the entire ride. I opted for my trail running shoes (Inov8s) instead of my riding boots. I was glad for the agility and control over my legs and ankles and heels that they give me. Sometimes in critical moments I feel like I am confined and not fully in control in any of my riding boots. Riding an up horse on a windy day requires the right tools - for me that is comfortable, but warm layered running clothes, and running shoes - I need to feel loose to move and react. Riding, even at the walk, is an athletic event every minute. I just can't be tangled up in boots or clothes that are too rigid.
As nervous as he gets, Pie is a willing horse. He tries very hard to be good and today he did not disappoint. He stayed with me in the field and by the time we got to the woods, he was quiet and relaxed and listening to me completely. The wind held no power over him anymore. Hooray.
On the way back to the barn we stopped in the field to graze and I did give him the reins and loosened his girth while I was still on him (a little tricky on the dismount later!). 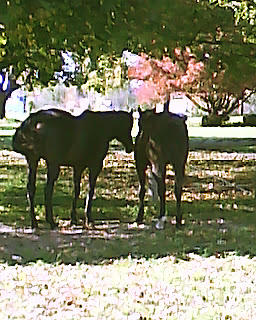 I am so glad I rode today if only to watch Pie go back out into the pasture with his friends. He was sweet and sleepy and all his bossiness was gone. I feel better when I run each day and I definitely see a change in Pie after attention and exercise. 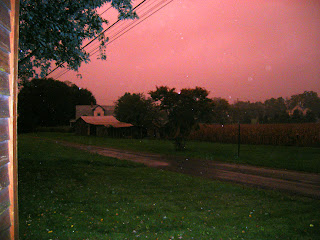 I took this picture of the pink sunsets we've been getting at my house this autumn. I am hoping that the red sky means a pretty tomorrow with NO WIND!
Posted by juliette at 11:05 PM