Crack a smile and cut your mouth 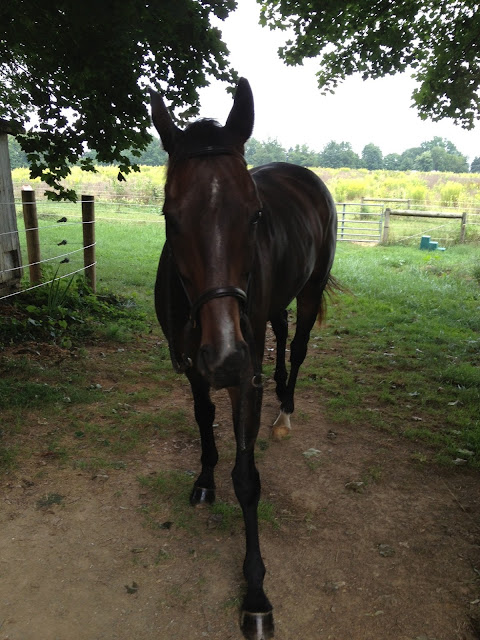 This horse Sovereign. What am I going to do with him? Earlier this summer the tip of his left ear was missing! Lopped right off and bloody. Needless to say, I was freaking out. I sprayed the Holy Water (Vetericyn) daily and it healed perfectly and the long hairs make it look fairly even with the other ear. We called him Van Gogh for a few days, poor honey. Now, the same size chunk is missing out of his lower lip. The lip is a difficult place to treat with spray.

In the photo above he is showing me his hoof. There is a matching notch out of that too. The farrier thinks that an abscess might have blown through although he was never off at all. His feet are all shiny from the wet grass. 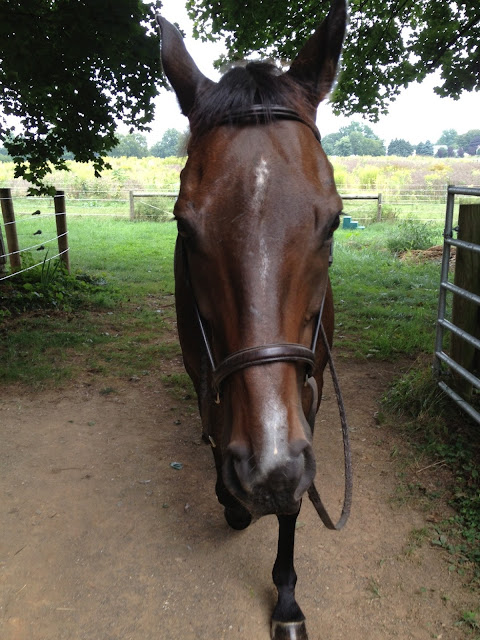 I'm beginning to realize that most of the trouble comes from one impish younger sibling. Pie steers clear of all their hijinks, but the brothers nip and bite in gelding play incessantly. In addition, Little Foggy has wormed his way up the pecking order to where he can now steal apples from anyone without retribution. I've seen him mouth Sovey's ears and tug on his lips. All my searching for an errant nail and the whole time the problem was much bigger. Sovey is a rough, tough cream puff of an alligator who will bite humans in an instant but so gentle with his ear-nipping, lip-ripping baby brother.

And in thrilling news - to me at least!!!!!!!!!!!! Pie and I were captured on Google Maps!!!!!! Last year I remember riding out by the road and I saw a car go by who looked to be Bing or Google. It was a tiny white vehicle, traveling super fast by us, but there were cameras way up high on all sides of it. Well, this morning I found the photos they took that day! Pie was good for the first second, but then he started to shy. In the second photo, below, you can see me leaning forward to reassure him. I only put up two pictures but there really is a whole series. I am so happy about this!!!!

Hopefully if you click the images they will enlarge. 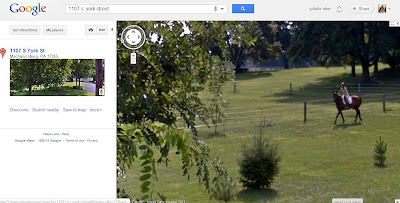 The funniest part of this story is that later that day I mentioned it to Brian and he said that he thought he might have been photographed at our house three miles away. Sure enough, I found the photo of him in the van pulling out of our driveway!

I am not sure why these photos of me riding Pie are a big deal to me, but they are. There are many things that I could be excited and proud about in my life but this series of candid photos are right at the top. I think it is the fact that I ride every single day and, arbitrarily, Pie and I were caught in the moment doing what we do. We have 40 acres and yet, there we were, right when the camera went zooming past. I know Brian wishes he was caught running. How lucky am I to have been captured at that split second doing what I love most in the world? Answer: VERY!!!
Posted by juliette at 8:47 AM