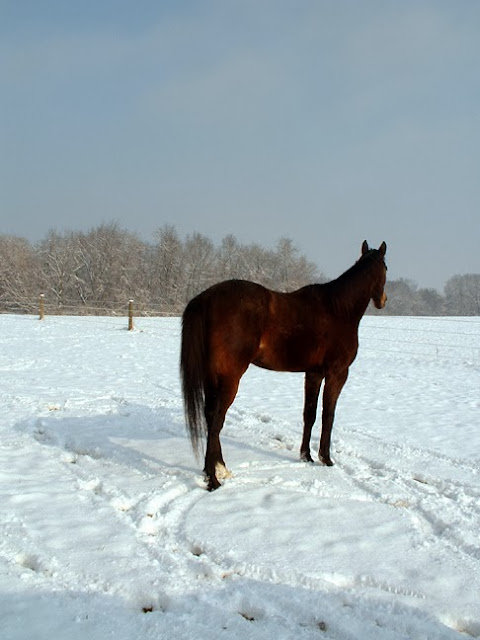 Yesterday afternoon brought a snowstorm that was a little more fierce than the one I rode Pie in on my last post. This new storm had more aggressive pelting snow crystals and made me think it would not be fun for me or the horses to go for a ride.

I did bring the boys inside for a snack and some grooming. Pie was jumping straight up in the air like a spring before I brought him in and also inside his stall. He does this when a storm is in town. That is why I was so proud of him last post because he was good for our ride.

Once, in a storm back in December of 2010, Pie got so wound up and springy and then he started rearing and walking on his back legs. My mom and I both saw him fall over in the deep snow backwards! I never saw anything like that before - I thought horses would die if they did that. He did not turn out to be a big rearing horse, luckily, so that was a one time snowstorm occurrence. But the springs straight up from a standstill are still his favorite move and he was springy yesterday!

It was Foggy's turn to go for a ride, but I just couldn't tell if the conditions were too bad. Foggy is such a sweet, kind horse that I can't trust him to tell me if he is unhappy. He would take me all over the farm even if he was uncomfortable.

I really had no intention of riding. I told Brian earlier that I was just going to groom. But, I am seriously addicted to riding. I had my running clothes along and knew a run in the snow would be perfect (which I did later and it was so lovely!!!) but a quick ride might be fun too. So after I brought the boys inside, I looked at Sovey and asked if he wanted to go out for a ride. I told him the whole story. I explained, holding the bridle, that I thought it was pretty out and I would love to go for a ride. But, I didn't know if it was unpleasant for a horse. I promised to listen to him and if he didn't want to go at any point, even in the beginning as I was tacking up, he could just tell me. I know him well enough to know that even out on the trail, if he is unhappy he will make that clear straightaway. I like that about him.

I jumped off and checked his back legs - they were not cut - the mounting block is wooden and I was worried he banged them badly. He was fine. I dropped the reins and he just stood there in the snow like he wanted to go. I started to double think his behavior. Had he heard something that made him back up and I didn't hear it because of all my layers? Or was he saying "no ride"?

I lined him up again at the mounting block and got on. This time he walked out of the wagonshed and around the corner. As soon as he got out in the snow and clear of all obstacles he slowly and methodically backed up and stopped and would not move forward. Of course, this is very unusual behavior.

"Ok, Sovey, I hear you. I promised to listen and I hear you loud and clear now. I am just a stupid human who didn't get it at first, but you do not want to go out in this horizontal pelting snow for a ride. Thank you for your patience with me."

I crack up reflecting on it this morning. He first backed up quickly, dramatically, exaggerating his emotions for me so I could understand, but instead I thought he might have meant something else (what a fool I am)! So then, he slowly backed up out in the clear, dragging each foot back ridiculously slow like he was pronouncing words s-l-o-w-l-y for a daft person. Which he was.
Posted by juliette at 9:03 AM