After nine days I let the horse run free 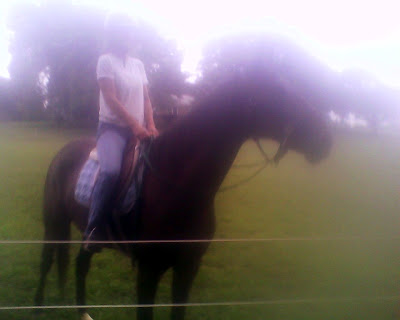 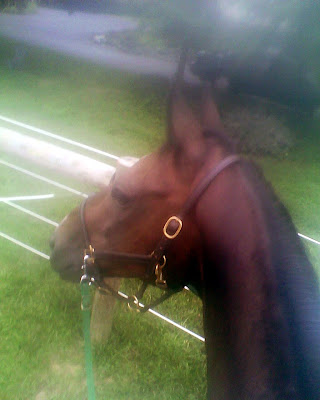 Below is a photo of mom coming out to give the good boy carrots. She is almost completely recovered from her fall. Every now and then she has a twinge of a spasm in her back/hip where she landed, but she is doing great. Recently, we have been reading my grandmother's diaries from 1955, 1956, 1957 and 1958 and it tells of my mom getting tossed off all the time. In those days she was healed and back on the horse within minutes. Now, at 66 years old, it takes longer to heal and that makes my mom mad. 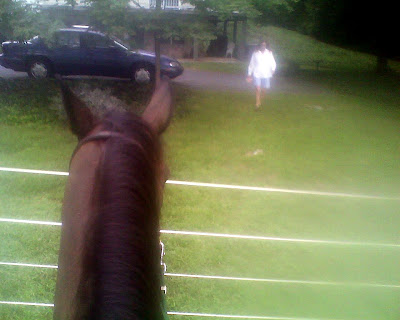 On Friday evening, I gave Pie a thorough grooming in the barn in the cross-ties. He loves that time together, (I think). In the cross-ties, Pie can see Sovereign in the small paddock right in front of the barn and he allows himself to relax and drift into a sort of alpha state as I am currying and brushing him. Pie isn't quite as ticklish as Sovereign - much more thicked skinned - so it gives me the closeness of grooming that I crave and miss having Thoroughbreds as opposed to other types of horses. I then took him out to graze for a few minutes to add more relaxation. Then, back in and quiet tacking up. He was a lovebug as usual. We rode all around the barn buildings and houses and over to my mother's for carrots. The rides are so short now because of darkness. Next week when Maizie goes back to school, I will switch back to the morning riding schedule. I think the horses prefer that. 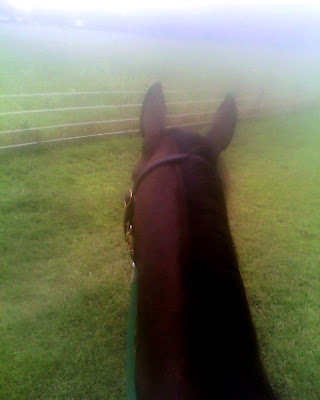 My ride last night on Sovey was fun. I decided to ride in a halter because the last time I had ridden him I discovered two tiny cuts/rubbed areas under his chin on his jaw bone. I wasn't sure if it was from the Bitless bridle. I was mortified to think that the Bitless caused it and I want the cuts to heal completely before I ride him in that bridle again (if I ever do). The pasture antics of these two geldings make abrasions and cuts so commonplace that it is difficult to tell what is causing anything. I have never before experienced first hand the playful nuttiness of geldings, although I've heard about it. I laugh when I think of how we used to react (overreact) if my mare had a tiny cut. We were beside ourselves with worry. Now, with these two clowns, the cuts are numerous and the fly masks are in shreds. Everyday. Pie's favorite place to grab Sovereign is under his chin which is why I can't tell if it is from the bridle or not. It worries me though. I emailed Sydney and decided to try the Nurtural before I discovered the rub marks so hopefully I will get a new perspective soon. The halter isn't great - obviously it doesn't offer too much control and could rub a horse horribly if you would tug too much. Our halters are ridiculously loose and I was very careful not to pull on Sovey. I mostly remained in the pastures (to my mom's delight) but when she went back in the house, we snuck out for a tiny bit of riding away from the road. Sovereign was funny when I first tacked up. He would not walk forward from the forebay like he was trying to tell me that he still only had his halter on. I had to convince him, "the smarty pants" that I hadn't forgotten the bridle and that I was doing this on purpose. Once he realized that we were going riding like this, he was very cooperative. I love this horse!
Sadly, when we returned, I discovered that Pie had a mangled left rear thigh in front of his hock. I can't believe he was like that when I put him in the paddock so I could ride Sovey, but I can't find anything that he may have cut himself on. His leg was swollen there, but the cuts are not deep - only the top layer of his hair/hide is ripped off. He won't allow me to touch it. I managed to get some triple antibiotic on it between kicks. He was walking on it ok and better this morning so I am certain it will be fine. Ugh! Horses worry me at every turn!
Posted by juliette at 8:43 AM