I've got to keep on keepin' on

The days have been hot and humid and buggy with little or no time for proper riding. I did sneak in two rides - Monday night on Pie - Tuesday on Sovereign. Both horses were good, although Pie was better than Sovey. I rode Pie in the pastures because I got to the barn late and it gets dark too soon now in the evenings. This is a sad sign - summer is drawing its curtains! I hate to think about it. While we rode, I could hear the high school marching band practicing. This sound brings back a flood of memories of riding my mare, Penny Lane, at the farm in the late summer. I remember the feeling of anticipation (and dread too) about the coming school year whenever I would hear the marching band practice. My sport in high school was tennis, but it seemed wherever I went in the fall, whether on the tennis courts, at the football games, or even riding on my horse, I would hear the marching band! Pie didn't care one straw about the band. He was eager to finish to get to his apple tree. 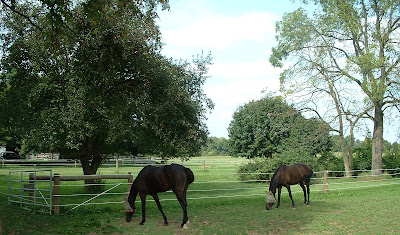 Our poor apple trees, shown in this photo from last September, had too many apples this year and both had large branches break! We had them trimmed earlier to try to prevent such an event, but the amount of apples that showed up was obscene. The branches just could not support all the weight. I hope our tree trimmer can salvage the trees. Can you imagine - too much abundance? The same is true with the behaviour of both horses and these apples - too much of a good thing. Last year, if you recall, I had problems with both horses leading without head diving for grass or apples. You can read that post here. That problem worked itself out with me being vigilant about "one last bite" really being the last bite and then we move forward without another thought about lingering. This year's problem with the apples is coming in the form of obsession. Pie (fatty) is amazingly the less obsessed of the two boys. He happily eats the apples, but he also grazes on grass and seems to enjoy his ride. Sovereign is apple nuts. I think that he thinks of the apple tree the entire time we are riding. It makes me wonder about his rushing last fall on the trail. Maybe it was all about the apples. All I know is that he was very naughty on Tuesday evening and would not go forward on the trail when we were heading back out, away from the barn. He had walked out perfectly fine to start, but it was clear that after 20 minutes he decided that we were done and it was time for his untacking and grooming and apple grazing. I wasn't finished and it really irked me. I don't carry a crop - I probably should for GENTLE urging, but I am not a crop person. He was very obstinate so I dismounted and walked him forward until we were by the turnoff. He stood very nicely for me to put the stirrup to its lowest position and I got on easily. (This is nearly impossible on Pie because of Pie's height.) Sovereign stood for me to re-adjust the stirrup. I walked him forward and repeated the practice of going back to the barn and then back out away from the barn. He stopped again and no amount of urging was going to move him. I dismounted again and repeated the exercise. On our third time, he walked forward and out in the direction I wanted to go. Success. Still, he is way too excited about the apples. I started the whole problem by allowing them this special treat. It does seem to be like looking a gift horse in the mouth to ignore these wonderful trees when we have horses, but I guess only Pie can handle the treat without becoming a spoiled little boy. 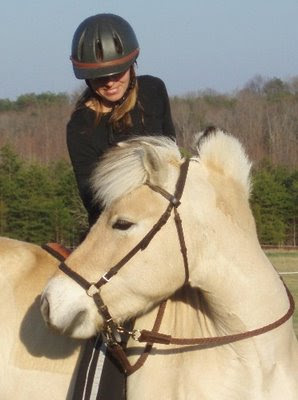 Now I have a question for everyone. Can you please help me find out what kind of bridle this is (above) and what kind of saddle is pictured below? I use the terms bridle and saddle loosely because obviously neither are your average bridle or saddle. 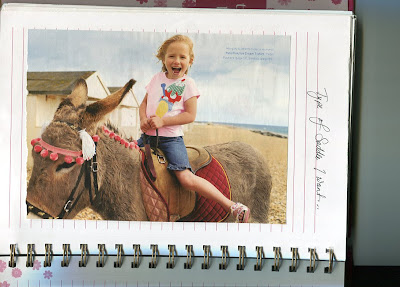 The bridle was featured in one of my favorite blogs, River Ridge Farm, which disappeared from Blogger as soon as I discovered it. The rider and her sweet Fjord, Izzy, used this bridle often, judging from their photos. I am certain you all (especially Sydney) will quickly fill me in about what kind it is.
The saddle, I believe, is more elusive. I consider myself fairly adept at internet research, yet this precise saddle/bareback pad has me stumped. This photo is from a Mini Boden's catalogue, circa 2007 (click on the photo to enlarge). I ripped it out and glued it into my journal as soon as I saw it because it is exactly what I want. I have found many similar type saddles, but they are just not quite it. The problem of course, not to get too risque, is that a Google search of "bareback saddle" often elicits...um...how should I say...colorful returns! So any help out there would be GREATLY appreciated! Thanks!
I hope the end of this month (and glorious season) finds you with much horsey time. I will have to live through your blogs vicariously for a week or two. My dear, sweet, kind Maizie girl is heading off to middle school and I am having a nervous breakdown. Her bus was to pick her up at 6:37 am!!! We finagled a way to walk to another stop and gain 20 minutes, but it is still quite a change for us. We like her to have a good night's rest and to be fully awake without hurrying and rushing, yet we would have to put her to bed at 7 pm to achieve that!!! What is wrong with this world? Is it any wonder why middle school kids are so prickly - they are all just tired. Ok, I am stepping off my soapbox now...sorry!
Posted by juliette at 2:49 PM