You got to make the morning last 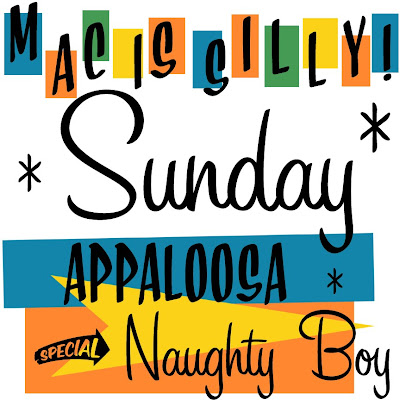 Today was rainy and cold, just like last Sunday. I went to ride Mac, the Appaloosa gelding. He was very good for me on Wednesday. We successfully circled the lake twice on that day after early stubborn turn-arounds. Today, I am sad to report that we didn't make as much progress. I have only ridden him in the bitless. He tries to pull many stunts in the ring. I think he is used to frightening his lesson charges in the corners by side-stepping and pretend "shying". I got him to work through that by leaning over and dropping the reins while patting his neck. That sounds weird, but he has these buggy eyes and I don't think he can see too well. I like to lean over so he knows that I am there with him if he actually is scared. He stopped the silly side-steps and walked through the scary corners perfectly. Then, I sat back and pushed him through the corners seated properly. He was very good and obviously smart enough to get this exercise. I know he is attached to his ring from all the lessons there, so I wanted to take him outside to see if we could bond a little like we did on Wednesday. Sadly, just getting him through the gate to the lake trail was a feat this morning. I had a sinking feeling that I wasn't going to be as successful as I had been before, so I kept trying to ask for little things he could do well. Unfortunately, he kept making each goal smaller with each try. I walked him down the first straightaway on a loose rein. He got to the end and then wheeled around and attempted to head back toward the gate at a fast walk/jig. We did this a number of times in both directions away from the lake gate. For the first few minutes he would increase the distance, but after he figured it out, he started to decrease it before his quick return attempts. There is a steep hill leading down to the lake and I used the hill to work him in serpentines. He seemed interested at first, then, he was done with that and started rushing the hill, diving for grass - just being ill-behaved. The barn owner's daughter (age 8?) was out walking around in the lake area so I enlisted her help to be a "lead pony" for me. I encouraged her to make small talk (we couldn't really hear her because she got so involved in her conversation that she was walking way up ahead of us!). I gave him the reins and he plodded along super well until we made it 3/4 of the way around the trail. Then, stubbornly he wheeled around again in a nervous frenzy. I decided to make our return in a calm manner more important than finishing the full trail in the direction that he obviously didn't want to go. By asking for small circles, serpentines, and figure eights we did finally return on a soft (fake - looked soft, but really wasn't), long rein, but I was frustrated because it was clear that he wasn't happy throughout the whole process. That irks me a little, because it seemed like Mac enjoyed the ride around the lake on Wednesday. It was a damp, depressing day in Florida punctuated by a frustrating ride. I heard Feelin' Groovy on the way home from the barn and made a mental note that I felt many things, but not groovy.
Posted by juliette at 9:57 PM