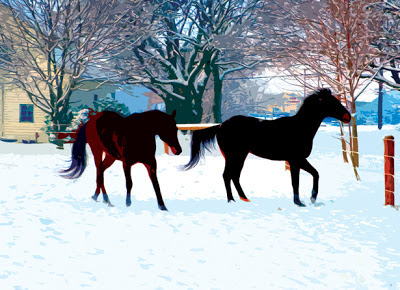 Yesterday a big snow was predicted and Maizie's school was cancelled. We did get snow - but it was wet and slushy and turned mostly to mud by noon. I am not complaining - spring is here. But the small amount of snow we got frightened Foggy!

Everyday when I go to the barn to ride, I bring the boys into their stalls. There they have fresh water, hay, and a small handful of grain as a snack. Pie's hay isn't as rich or fun as the brothers' hay so he usually has his head over the door and is pawing to GO! I get him out and groom him. If it is "his day" to go riding, I tack him up, but if it is another boy's turn, then I check to see if they are finished eating.

Foggy, though, is a calm and methodical horse any day. He comes in slowly and nibbles happily. He is hardly ever rushed or upset. I rarely ride him first because I like to make sure he is finished with his whole, s-l-o-w, routine and it takes forever. He eats his grain, chewing ever so slowly and then he pauses and then he drinks. He seems completely oblivious to me or the other horses while he is enjoying the full routine. Meditatively, he chews on some hay then pees. Next, he nods off, while standing. Then, he flops down to sleep like a baby deer in a tight ball on the sawdust. He relaxes through the process so I literally have hours to ride another horse first. On some days, poor Foggy is still resting like a deer when I am done grooming, riding for an hour, regrooming and grazing the first horse. I sneak into his stall with him and curl up beside him on the sawdust. He is adorable!

Yesterday, though, something was amiss. Foggy was nervous and flighty. After his grain, he was ready. He had his head way out over the door begging to go. Oddly, Pie was still munching hay, so I got Foggy out and started to groom him up. He was electric. His head was high and he twitched and wiggled. Very un-Foggy-like. I tacked him up and we headed out through the remains of the snow. He relaxed at first, but then he spied my mom on her porch/deck. She was high up in the air and shoveling snow off and throwing it down to the driveway. Foggy strained his neck and flagged his tail and out came the sweetest, most gentle, worried, "where are my friends?" whinny I ever heard. It was so sad and foal-like.

I turned him around and we made our way back to the barn. I dismounted and led the little baby back inside. There he nuzzled Sovey and Pie and traded breath in their nostrils. Ok. All is well. He sighed and relaxed. I took him back outside and remounted and off we went for a wonderful ride all over the woods and fields. Poor honey had been so scared and just needed a quick reassurance from his friends.

It started sleeting mean pellets at us from the east on our way back home, and Foggy was fine, but I was freezing and soaked with the rain/sleet. After his untacking, regroom, and grazing, I stuck him in his stall and made a cup of coffee. Whew - warm up and second wind! And outside, the sleet stopped. Hooray! Time for a Pie ride with lots of trotting. There is nothing better than a tricky weather system to get Pie interested in moving. I love to use his naturally occurring impulsion on those days. His trot floats over the ground because nothing is forced. What a perfect day -happy boys, happy!
Posted by juliette at 8:17 AM