where have all Papa's heroes gone? 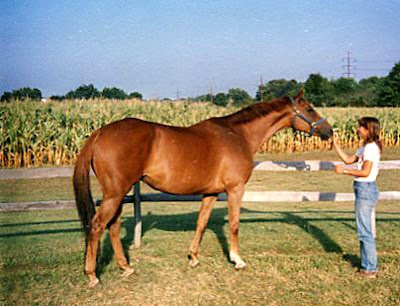 Here is a snap of me with my mother's Thoroughbred, Riboccan. We called her Abby. This picture was taken in the summer between my 7th and 8th grade years (1980). She had eight starts and placed, but was mostly used as a broodmare before my mom bought her. She was a handful to ride. I never fell off of her exactly but I have vivid memories of landing on her neck and hanging on for dear life. Once she ran me into a standard, but I managed to stay on - not because of any expert riding - just luck. She tossed my mom off quite a few times. She was a buck-twister. She would buck to unseat you and then twist to finish you off. My fear of chestnut Thoroughbred mares can be traced back to Abby. Fortunately, Red, the sweetie pie I rode in Florida this past Christmas, changed all that. I think this picture of Abby is hysterical because it shows our previous "fencing" that we used for our horses. We had the pasture surrounded in split-rail with only two rails! As that fence aged, it became so dilapidated that you could blow on it and it would fall over, yet our horses stayed inside. What were we thinking?! They could have stepped over it! I guess they aged too so it worked out ok. Abby lived until she was 27 years old. She really never mellowed too much but we loved her anyway.
Another Thoroughbred friend who is mellowing nicely, is one Pie-Pie boy. I rode him on Sunday morning and he was a delight. He had the new, partially built run-in shelter to think about, but he kept it together superbly. I decided that he was ready for a full seat and firmer leg, so I pulled it in a little more and sat "tighter". He collected at the walk for me when I asked. Then, we circled full and round, repeating all over the property. He never cuts in, but listens to me and bends like a much older horse. He did not seem to lose focus, even when he was frightened of the shed. He came right back and was paying attention to me, which I thought was amazing, honestly. He is such a good boy.
I rode Sovereign on Monday at lunchtime. The workers were taking a break and it seemed like a good time to sneak in some riding. Sovereign doesn't bend as fluidly as Pie, but he makes up for it in these early stages with his bravery. He not only wasn't frightened of the shelters, he walked right up and tried to walk in one. It isn't finished yet, and I was afraid there might be stray nails, but I am impressed with his calm sensibility. His back is stiffer than Pie's so the flexibility will take a little more time. He doesn't have a bit to pull against which helps. If he had a bit it would be a lost cause. He would just lift that giraffe head of his and bully forward. He still tries that maneuver, but he does come back around my leg when I focus on sitting deep and asking. It is hard for me to think that much when I am laughing so hard at his determination to investigate. I plead guilty to being relaxed sometimes. I have so much fun experiencing their innocence that I don't always ask as I should. There is time for that. Why hurry them when they are doing so well?
Below is a picture of my father on a "Picture Pony". From what I understand, these ponies would make the rounds in towns and children would have their pictures taken on them. So cute!!!I baked Dad his annual cherry pie for Father's Day, but I forgot to mention him in my blog. Hopefully this adorable black and white memory will make up for that! 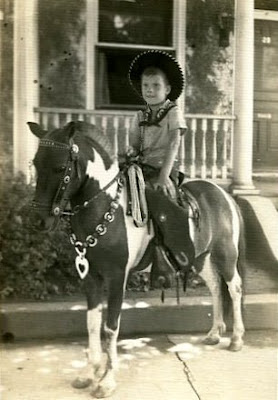