where have all Pie-Pie's apples gone? 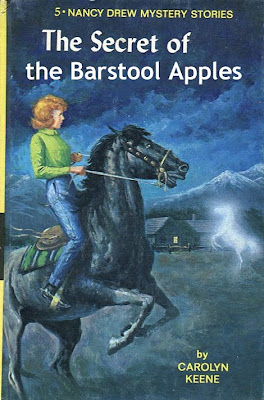 Lately, Mr. Pie has been most annoyed! Every time we make our way out to his favorite apple snack station, the barstool, there are no apples!!! The barstool is happily placed in Pie's view, and even is sporting an adorable white "Apple" sticker on one leg, but there are no apples! At first, I thought our dear friend had run out of the money needed to support Pie's gluttonous apple habit. Apples are expensive and we have been decidedly spoiled all summer by the generosity of this kind neighbor. But, economics aside, it just didn't make sense because each day the barstool is upright in the field even though, on more than one occasion, Pie has shoved it over in frustration.
Influenced by the fact that Maizie has taken it upon herself to read all the original Nancy Drew books this summer, I attempted a little sleuthing of my own. To be perfectly honest, just like Nancy would be, I didn't even get to sleuth one bit because the thieves just appeared in front of me one evening. I have been turning the boys out at night because our daytime temperatures have been in the mid 90's. I was walking Sovereign out to the pasture and I heard a soft "giggling" sound coming from the hayfield. It was early evening and the sky was full of pink cotton candy clouds. There, in the middle of the field, was a Mommy Deer and her two babies all frolicking around. Pie and Sovey stood still as "whispering statues" and we all three watched in delight as the other three performed for us. The deer did not seem frightened in the least. As I watched, enjoying their lovely dance, a light bulb went on over my head - OH! YOU ARE THE APPLE THIEVES! Carson Drew would be very proud. And Pie is Bess (pleasingly plump) and Sovey is George (tomboy)!!! (Only Nancy Drew-ers will understand!) And..."J"...no worries if you have run out of apple money!!!!
Posted by juliette at 9:34 PM