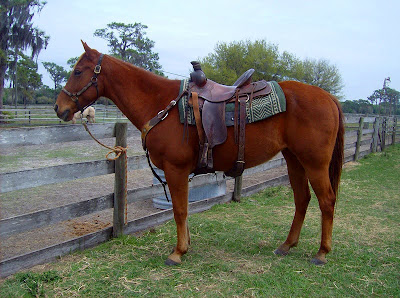 Here is a photo of the sweet gelding, Danno. We met him yesterday afternoon. My friends, Ted and Janet, just brought Danno home to their lovely barn and house. 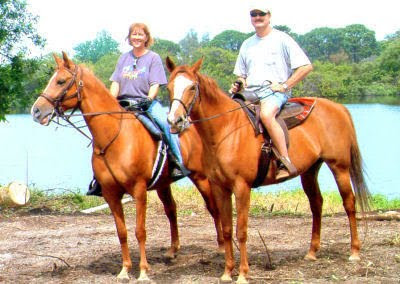 Janet on Diablo and Ted on Red, above, are friends I met in the winter of 2008 here in Florida. While I was still in Pennsylvania, I received a heart-wrenching email from Janet that they lost their other horse, Colonel on Thanksgiving day this year. He had a seizure while Janet was riding him and folded up under her and started bleeding violently from his nostrils. The vet arrived within minutes and realized that he was bleeding internally and was blind. He must have had a brain aneurysm. Poor Colonel was only 6 and obviously, Janet and Ted were devastated. They found the adorable Danno, a registered QH, and brought him home this weekend. Brian, Maizie and I headed over to meet him yesterday. Janet and Ted live in a horse community where all their neighbors have horses in their backyards! How lucky is she? Her horse, Diablo, seems to be enjoying his new pasture mate. Janet invited me to come back to ride Danno this week if it ever warms up. She doesn't have a bit for him yet so I am going to bring the bitless bridle. We were laughing because she has a bit hanging in her bathroom as decoration (her house is beautiful!) and she thought she was going to have to use that!!! 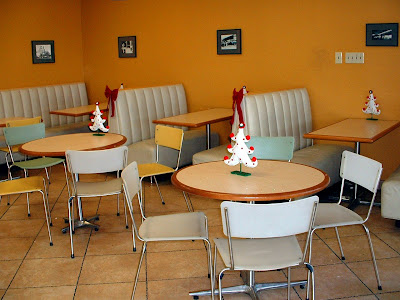 Janet's house is near this mecca of retro yumminess - a Krispy Kreme!!!! We had never been to a real Krispy Kreme before. We had only sampled the original glazed in boxes from the grocery store. The "Hot Now" sign was lit and the unbelievably kind man behind the counter spoiled us up with the usual complimentary "first visit" free samples. 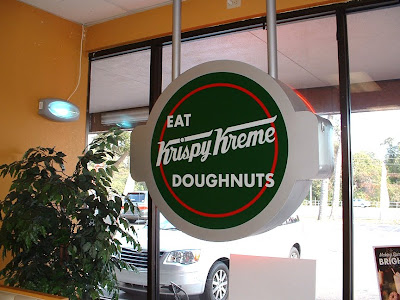 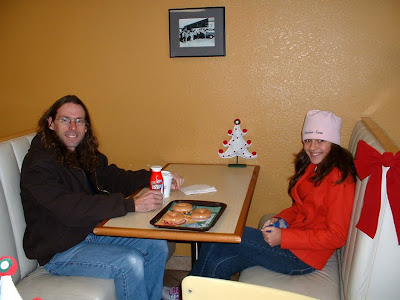 Needless to say, we bought a dozen to take home after these first three! I also purchased the signature, retro coffee mug that is perfectly sized for a 1950's amount of coffee. Heavenly. A perfect day in CHILLY (look at Maizie's outerwear) Florida.
Posted by juliette at 10:22 AM