anyday, I will see you smile 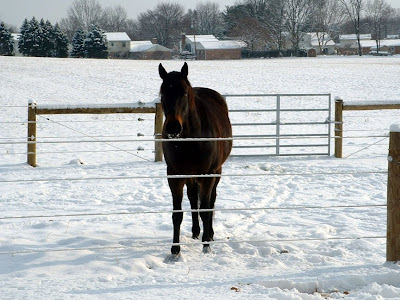 Since Wednesday, I have slowed down the pace with the horses. I groom and graze (hay in the driveway because of the snow) and lead them around the barn and yard, practicing nice leading habits. Pie especially likes this routine because he is basically a lazy horse. Riding is really too much of a bother for him, I've noticed. Sovereign enjoys going out for a ride and has seemed to me to be a tiny bit disappointed that I haven't been riding him.
Today, I decided to tack up and ride. I alternate days, and it was Pie's turn. He was annoyed that he might have to burn a few more calories than necessary. In the ring we worked on standing still to mount. He seems to have forgotten completely how to do this while I was away. I usually mount in our wagonshed by the barn. I think that was a safe zone for Pie and now I am asking him to mount in a "new" space. This will take time to get it perfect, but he is doing much better. I forget that little things that I do every time I ride, like mounting location, become habits to a young horse like Pie.
After I was on, whenever I asked Pie to circle in a direction he didn't think we should go, he threw his head up and down and stamped his foot and pulled a mini tantrum. These antics are similar to what he does out on the trail if he has reached a boundary or is frightened of something and doesn't want to go forward. I was able to move him through these in the ring both today, and the last time I rode. I am hoping I get the same success out on the trail. Last Easter, we got "stuck" in a tantrum in a neighborhood and I had a tough time getting him home.
Today, Pie shied violently in the upper field and we circled around and retraced our steps back to the ring. I gave him some time to relax and try again. He was very rattled, but decided to trust me and move forward. I still don't know what he saw (a manure pile?) but I am glad we conquered it. Eventually, I did take Pie out of the pastures as a reward and around the tennis court, around the buildings, and down the driveway. His antsy behaviour tells me that he doesn't like riding in the ring or pastures. Brian says that Pie knows that there isn't Grandma Carrot or Barstool Apples in the ring and I think that is pretty accurate. What does that say about me? I have a perfect trail horse as long as the trail includes snack stations?
The happy news is that the post ride grooming and grazing were calm and relaxed. Pie was not nervous after our ride which is a big improvement.
Posted by juliette at 7:06 PM