What could make a boy behave this way? 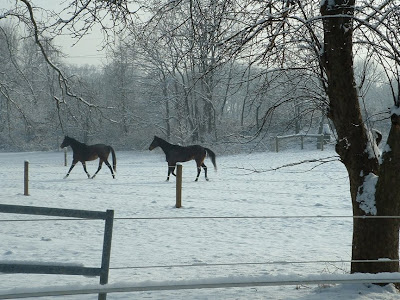 This afternoon when I got to the barn it was 21 degrees and sunny with about a 12 mph wind. I didn't plan on riding, but Pie was super calm during our hand walking, grazing, and grooming session, so I tacked him up. 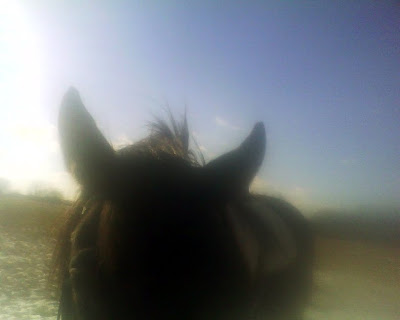 As we started out around behind the barn and tennis court I was thinking about my last ride and my post about discovering that observing some basic equitation rules helped me out of a tight spot. When I was riding today I started laughing thinking that my post makes it seem like I usually ride without sitting tight or having nice hand/leg positions. But, today, I was aware that I ride differently depending on what the horse is doing under me.

This afternoon, for example, the wind was blowing from the west into our faces. Pie was walking out looking and waiting for anything to tell him that there was danger. In this situation, I have to almost pretend like I am a relaxed sack of potatoes on his back. At the beginning of our rides, I have to use my body to tell him that there is zero to worry about. It sets the tenor for the rest of the ride. If I would sit tall and grip at all with my legs and keep my reins taut, it would be certain disaster! He would "hear" that as a sign that I am prepared for danger and he would prepare himself too. Instead, I lean forward and pat him a lot, giving him his head and reins even though I really have them if I need them. I practice balance in case of a spook, but I am not gripping with my legs at all. It is all a great big lie on my part, but it worked like a charm today. He happily walked into the wind and through our woods and trails. He was so relaxed. He sure didn't seem like a 5 year old Thoroughbred on a chilly, windy day. 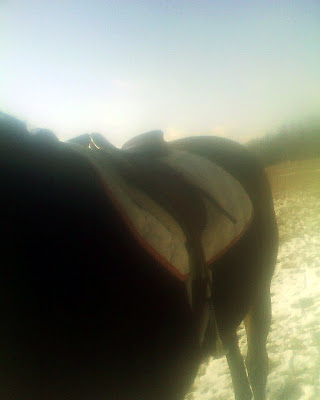 We made it out around the field and to his yummy barstool apples. He knocked them onto the ground and then couldn't seem to find them, I guess because they were extremely cold/frozen. I could not believe I was going to have to dismount since we are having mounting difficulties lately! But, I did get off and fed him his lovely snacks. 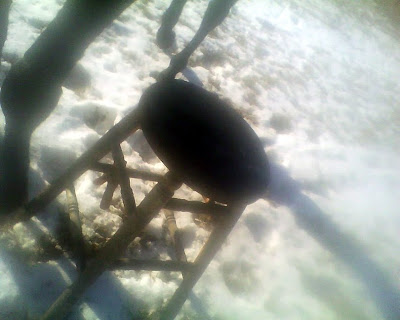 Here is the barstool. I figured I would take a photo of it and just sort of play around so that Pie would not get worked up and I could re-mount. I focused on breathing out and not worrying about mounting. I decided that we would take our time and he could whip his butt around as much as he wanted. We would just keep trying. We only turned around three times, and then he stood perfectly well. Good boy!
Next, he wanted to go toward the south woods. I decided that we were going to head back to our barn instead. Pie was so willing and wonderful the whole way back. Just as we were entering the driveway to my uncle's barn I started to notice zillions of tiny paw prints. I know they belong to the fox that we have been seeing every time we ride. There were so many prints and I was momentarily lost in thought when something happened. I still don't know what it was but Pie jumped and reared. I lost a stirrup and he kept on doing the half-rear/buck thing he is so fond of so I grabbed his mane and found my stirrup. He was very worked up but I got him back and we walked down and around the honeysuckle bushes. It made me mad that we were almost home because I didn't want to end on such a sour note. I circled him around the farmhouse and barn and he investigated the fire pit again so I figured he was fairly relaxed. All in all, it was a WAY better ride than Thursday's. Pie's behaviour during 90% of our ride today was as good as if it was a warm, spring day. I am very pleased!
Posted by juliette at 5:53 PM