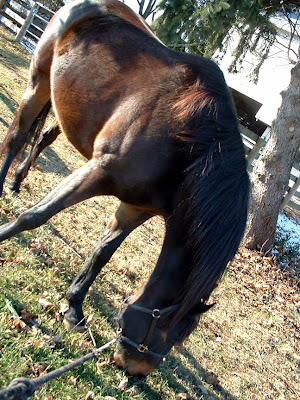 We left the sad, deserted shores of St. Petersburg on Friday and returned to icy Pennsylvania and our woolly mammoth twins, Pie and Sovey. 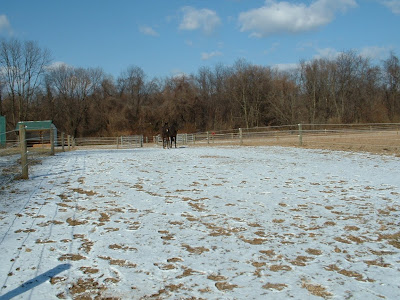 This, above, was the first view I had of them this afternoon. They were each struggling forward, too lazy to break into trots, but still extending their walks and craning their necks to be the first one to see just who was the stranger standing in their pasture. It was me and after a few minutes of awkwardness, Pie snuggled me up, plastering his long nose against my belly and tilting his head so I could kiss his swirl. He is such a lover boy. Sovey was more reserved, mostly because Pie bites him if he tries to get close and, in turn, he (Sovey) will bite me if I try to snuggle him! (I love you - don't touch me!) 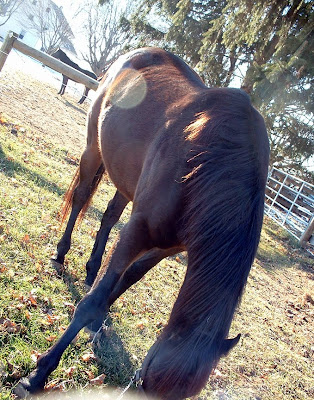 They were both so fat and happy. As I was snapping this photo of Pie grazing and Sovey in the background, I realized that some people would not like seeing their lovely Thoroughbreds in such a state. Pie and Sovey are unbelievably furry. Gone are their sleek, refined coats. Gone is the gorgeous sheen over thin, sinewy muscles. Instead, I found two H.R. Puff-n-Stuffs. And, I have to admit - I loved it!!! I am so glad they didn't lose any weight while I was gone and they are obviously happy.
I took Sovey out of the pasture first and carefully groomed him. Then, I allowed him to wander on the lead and graze. I knew where we would go. His favorite walk is around the tennis court and over to my mother's house. He has smartly realized that if he goes there and grazes nonchalantly that my mother will magically appear to feed him carrots. His plan went off without a hitch. The sun was shining, but it was dreadfully windy in the corridor that Sovey likes to graze. I wore my Carhartt coveralls and stood patiently (while he nibbled with his eyes closed) even though I was a frozen popsicle. I kept track on my watch, but I could only take 30 minutes of grazing and then I switched horses. I slowly groomed Pie up, grateful for the occupation in order to get warm. We then headed out to graze. Thankfully, my roly-poly Pie-Pie boy doesn't mind where he eats so I picked a lush spot out of the wind and in the sun. After his special yummy half hour we went back into the pastures and I started to pick manure. My hat was so low and my muffler (scarf thing) was so high that I was startled to suddenly be standing in the shadow of something large. Here it was Brian - stopping in to see the boys! After he visited for a few minutes I went back to my task only to be stopped by Pie. More scratching and swirl kissing required before I could finish the job. Oh, it is so good to be home!
Posted by juliette at 7:39 PM