it seems like too much love is never enough 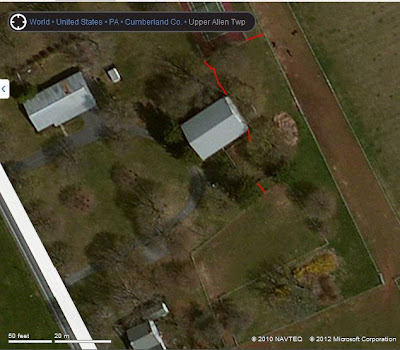 Friday was horrid in many ways. This is my second post today, but this one or the other one is probably lost to anyone who uses Blogger's "Reading Lists" feature. My blog posts will always be one behind unless you "stop following" and then "start following" this blog. Ugh. I thought that I would go to the barn to get some horsey kisses and love and a break from virtual world problems. All that I found at the barn was real world problems.


When we had the new pastures added earlier this month, I came up with the brainiac scheme to fence in a shady part of our farm. You can see where I added fencing, above, in red. This pasture has trees and lush grass and is in between three existing pastures. It is dead space that needs to be mowed so I thought it would be wonderful to make that a new pasture. Ha! My horses think this was the worst idea ever. I have turned them out there three times and there is no happy grazing in the shade. There is no contented munching on long grass while we play tennis. There is nothing remotely close to the idyllic vision I had. Instead they race wildly through the entire area barely avoiding low tree branches.

I despise the racing around horses do when they are worried and panicked. I just can't handle nutty horse behavior because most of the time horse worry is caused by poor human preparation. I spend days planning out every last detail of my time with horses in order to avoid such nonsense. When I introduce a horse to a new pasture, I always walk them around the perimeter on a lead or on their back. I make sure they understand the borders and I do this with each horse. Then I calmly turn them out. Most times there is very little excitement.

This space is different though because I ride them in here all the time. It is a very common border/area to them. I hand graze them here and groom them and they are not strangers to the fencing. But I suppose it is that very familiarity which is causing all the confusion. They just can't seem to understand that it is ok that they are at liberty in there. They race around and practically decapitate themselves on the branches and get separated and it is a total mess for 4 minutes until I can somehow catch them. Today was my fourth, and last attempt. I know Pie would like to graze in there, but the brothers have a Pavlovian response set up now that this place is dangerous and racing frantically is the only thing to do. Pie joins in and gets his round physique all sweaty in a few minutes. It is simply awful. I thought I was giving them the most amazing meadow of all and in the end, it was a failure. I may try again when they are 20 years old, if I live that long.
Posted by juliette at 7:58 PM