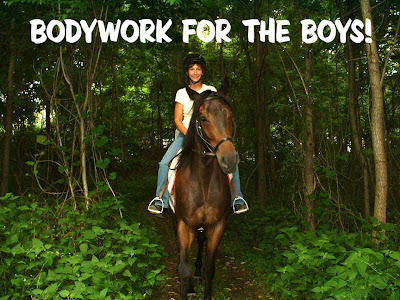 Wednesday we had a Masterson Method practitioner, Marie Riley, from Philadelphia come to our farm to work on the horses. I had decided on The Masterson Method after reading Kristen's moving post with dramatic photos about the recent bodywork she had done on Lazarus. I was most interested in what we could learn about Sovereign's obvious uncomfortable state of being. One caveat: this post might get wordy and I do not have photos of the session. A quick summation for short attentions spans would be to say that there were no dramatic releases during the actual visit, but all three horses, even Sovereign, started displaying very interesting behaviors after Marie left and these behaviors are still continuing. My own knowledge of The Masterson Method is minimal so this visit initiated the horses and me into this technique and I have been practicing what we learned and am happy to report that I am seeing results!

I immediately liked Marie. Her email communications even before I met her in person were clear and professional. We scheduled our appointment to start at 8am and she was punctual. Punctuality is essential when working with horses in my opinion. Because my boys are outside most of the time, any stall time must seem (to them) to be easy, breezy and intentional. Sovereign is aware when "something is up" so I try to keep a calm program running smoothly for him. Maire's timely arrival allowed me to pull them inside in a nonchalant manner earlier and quietly groom them (not Sovey) before she arrived.

We began by discussing  my concerns about Sovereign - namely his pain and her safety when working with him. We started in his stall and then moved to the cross-ties and eventually ended up outside in the forebay. He was uncooperative initially, but I do think he eventually understood that this process was intended to make him feel good. Marie was super agile and willing to bend and reach and do whatever was necessary to help him.

His usual demeanor when the farrier or vet is present is cooperative, but rigid. I generally hold him and stroke his muzzle but his neck is not released or relaxed for these visits. Marie needed Sovey to be free to release as necessary. This was difficult because Sovey wanted to use his freedom to crowd Marie and jab at her with his teeth and plastered ears. She was able to use her body and lead line to establish a safe working distance. Marie was smart in her approach and rather than follow a prescribed "one size fits all" routine, she alternated between different release points in her arsenal. She said that he was willing to allow her to work and release around his jaw, mouth, tongue and TMJ. Sovereign has a "pig eye" on the left. Marie achieved some releases on that side with eye closing and yawning and eyelid closing on that side. She also got some releases with his front legs and feet.

Pie was wound tight and not the puddle of love that I had hoped. In everyday life, he releases with huge yawns and eye rolling all day long and was exhibiting this even as Marie entered the barn. Her presence in his stall worried the big boy, so he was tight especially in his legs. Pie has a bow and clubfoot on the front right which makes front end work difficult. Marie was able to get Pie to release in the rear.

Foggy was also worried for a few minutes but then became the bowl of jelly and yawns and eye rolling that I anticipated. He loved everything Marie did with him.

Marie's visit epitomized the anticlimactic nature of working successfully with horses. Often, we as humans anticipate BIG results from a new horse, a new stable, a new saddle, a new trainer, a new technician and we are disappointed when the "new thing" doesn't deliver. But, in reality, tiny subtle changes are actually made and their positive results are far reaching and grow exponentially everyday.

When Pie and Sovey arrived in February of 2009 non-horse people would ask, "Well, did you ride them yet?" My response in the negative was usually met with disappointed faces. I remember thinking how those people don't know one thing about working with horses so I continued my slow and consistent program with the boys that had us out and riding safely in a few short weeks.

Similarly, I knew nothing about The Masterson Method before Marie arrived and she did not rush to teach me everything in one second. This is a slow process that needs to unfold at the horse's own pace. In time, I am going to research and add new release points to my knowledge, but for now, I am thrilled with the two or three releases I did learn on Wednesday. I have practiced with each of the boys and I am seeing more and more relaxation and yawning and eye rolling and sighing/snorting. Foggy even peed the other day when I was working with him which seemed like an odd, totally relaxed behavior for him. Sovereign is sure he wants me to do something with him because he nickers a lot and lines up in the forebay and waits after Pie and Foggy have their turns.

Sovereign has a habit of turning around and scratching his sides and ankles out on rides. He does this more than a horse that is biting at flies. He did this frequently, too, as Marie worked on him. She and I agreed that his body seems to "wake" up and tingle as he exercises on his rides and also as he receives bodywork. That makes total sense in his history because I have an easier time grooming him after his rides. In addition, he LOVES going for rides. Whatever painful cross he is bearing, physically or mentally, there is less of it after a ride. The few releases I have learned so far have been much more pronounced after I ride him. His overall demeanor seems to me more easy-going. After Marie's work Sovereign started munching hay in his stall which he rarely does when humans are in the barn.  I am enjoying how this new chapter is unveiling itself to us.
Posted by juliette at 3:29 PM