Sleeping with a full moon blanket 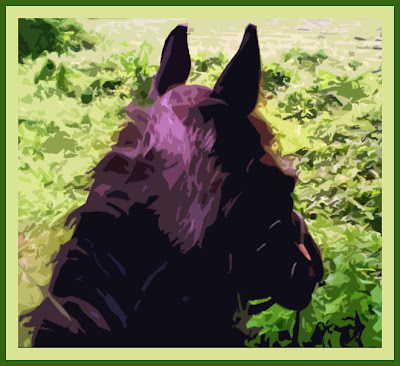 Little Foggy was the perfect boy today. Our temperatures have been cool and windy. The horses love it! I had a rough time getting started though because it felt like October. I am not complaining - just noting that there was more snuggling with blankets and coffee all morning instead of getting to the barn. I like when I am late to the barn because my arrival seems to stop the natural-ness of early morning grazing. When I am late, I think the horses tend to do more "horsey" activities like graze and meander and relax without checking on me and what I am doing.

When I finally got there, I thought I would groom and then get to work on much needed shed cleaning. Foggy had other ideas. After his grooming session he waited for his bridle and seemed disappointed when I didn't go to the tackroom to get it. Ok, Foggy - you talked me into it! I can do chores later. We headed out for a chilly, but sunny jaunt around the farm. We even walked under and around the mean Locust tree that had grabbed us last week. My mom kindly had trimmed the offending limb so we were safe.

After our ride, I cleaned out both sheds. Pie sadly thinks the sheds and fluffy sawdust in there are for his peeing pleasure. His fastidious urinating practice requires a soft surface without any splashing. Unfortunately, everyone has to sleep there later. We find them piled up like three pretzels, legs this way and that during their early morning siestas. It would be nice if Pie could find a better urinal. Ugh. I try to keep up with the mucking out there, but it is tough when there are three cute boys coaxing for a ride at every turn.

Yesterday Sovereign was a bugger to groom, but what a ride we had! He bit at me twice when I was brushing him. I try to go soft, but after three failed attempts, he will take no more. He was angry and I was too. I stuck him back in the stall for a mutual time out and then he nickered softly. He does this often after his ouchy behavior. I take it as an apology when really he doesn't owe me one. I wish I knew how to keep from hurting him. I should know by now that I have to forget the mud and just stick the bridle on him. Off we went for a ride and he did not disappoint. There was a soccer tournament at the church across the street. Sovey had to stand right on the edge of the road and stare at all the activity. I love how he stands and watches. He sighs and looks and sighs and looks and would stand there forever if I let him. He really enjoys watching humans and it seems like he is trying to sniff the air to get more information. He was quiet and not very interested in getting back to the barn which is my favorite kind of ride on any horse. And, happily, I was able to groom him fairly well after the ride.

Tonight is full moon and I thought June's full moon would be the one for the moonlight ride. The cool temperatures are going to push it back until July. I can't believe what a baby I am about "the cold" (58 degrees) - after all - I almost rode on November's full moon in Carhartts!
Posted by juliette at 7:24 PM