no matter how hard I try 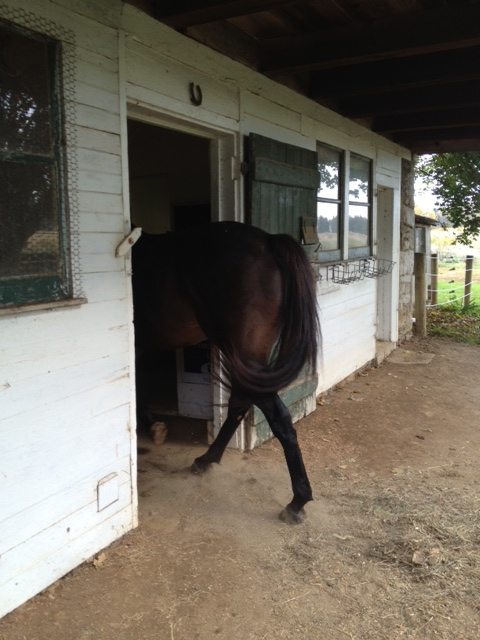 Into the barn Pie goes to wait out the storm...if only it were that easy!

Everyone here at Honeysuckle Faire is doing really well after Hurricane Sandy. Thank you for the kind emails checking if we are ok! Horses and people and buildings and trees are all still standing. We had a small amount of flooding in the pasture and Brian, Maizie, and I lost power at our home for 10 hours, but our farm had power the entire time. My thoughts are now with so many others who weren't so lucky.

I started preparations on Sunday by getting the stalls bedded extra thick. We had no idea what was in store since Hurricane Sandy's path was projected to pass right over us. My mother's name happens to be Sandy too which caused us to giggle a little every time a forecaster said, "Big Sandy" or "Frankenstorm Sandy" or "Superstorm Sandy" - much to my mom's chagrin.

The plan was to put the horses in at 5pm on Sunday evening. I do try to stay flexible with weather however. If there is anything I have learned with these horses is that weather is unpredictable and the best indication of what is actually going to happen is by listening to their (the horses') cues. Sunday was a very calm and quiet day and I kicked myself later for not riding. I try to ride at least one horse every single day, but I just had so much to do in the way of getting emergency preparations ready at the barn and our own house that I couldn't find the time. By 5pm there was no rain and no wind and the radar maps were showing that conditions would remain fairly good through the night so I left the horses outside. That was a tough call, but it ended up being the right one. Phew.

On Monday, the plan was to put the horses inside the barn by noon. I got to the barn at 10am and filled water buckets and put a small amount of grain in each stall with a ton of hay. I went out to get the boys from a far pasture but instead they took off cantering into a shed. Just then it started raining so I went into the shed with a halter to lead Pie into the barn. Pie would not budge. He would not move an inch. The wind started blowing a little and I was feeling rather ambivalent. I put the halter on Sovereign and he was equally cemented to the ground inside the shed. Finally, I tried Foggy. Same thing - not moving - no matter how hard I tried.

My heart sank because I had worried all night about what is the right thing to do during the storm - should I leave them out or bring them inside? I try to think through everything I do with horses because I am endlessly suspicious of what we, as humans, think is "common sense". Most of what I had previously believed as "good for horses" in the past is actually horrible for horses so I tried to think this problem out thoroughly ahead of time. We have many different safe pastures without trees that will not flood and access to two sheds. But, we also have three stalls inside a bank barn. The bank barn is old and has large trees near it. What if I brought them inside and the barn collapsed? What if I left them outside and their sheds collapsed or a tree fell on our fence and they escaped?

After much conversation with Brian about the structural integrity of the barn, I had decided to bring them inside, but their uncharacteristic unwillingness to come into the barn was making me rethink myself. It was noon and I was drenched so I left them in the shed and drove home.

The wind whipped throughout the afternoon and it rained pretty much horizontally, but I kept sane by telling myself that the storm was not as bad as our torrential rains in September of 2011. At 4pm I went back to the barn, this time, though, my mom volunteered to help too, so together we headed out to the shed with two halters. Pie still refused to walk in, but mom was able to lead Sovereign out and started up to the barn. Foggy followed on his own and I was finally able to drag/lead Pie out of the shed. Hooray! He was a handful and practically pranced on me the whole way into his stall. We toweled everyone off and they seemed genuinely relieved to be inside which helped me feel like we did the right thing by forcing them to come in.

The night was wicked and we lost power at our house, but the barn was still standing in the morning and so were most of our trees. When I put the horses out yesterday Pie was kooky wild from being cooped up all night. He jigged as I led him out and took off at once after I removed the halter. I like how he stands quietly for halter removal even though he is ready to blow. They all frolicked and raced around in the deep pools of water that had flooded the pastures. I brought them in later for grooming because it was still raining and a sloppy mess. Pie was still freaky wired so I decided to ride him. It was the last thing in the world I felt like doing because he was a nut for grooming and I was cold and it was lightly raining, but I knew it had to be done. He would feel better and treat his pasturemates better after. Also, I was afraid I would have to keep them inside again all night because of the flooding. 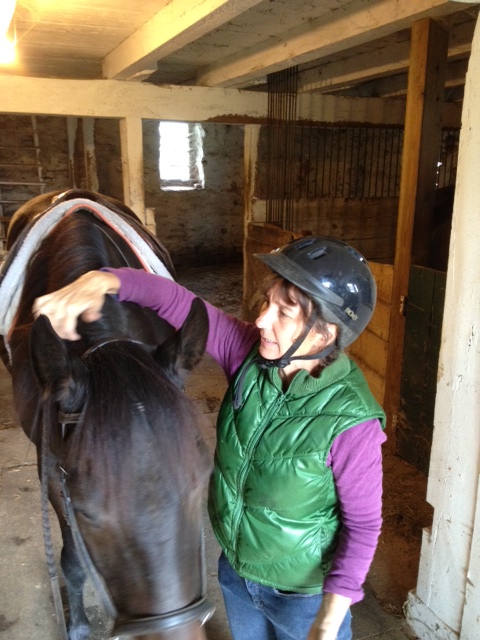 Sorting out an unruly mane on a sunny, calm day. No mane sorting for yesterday's ride!

Riding Pie when he is wild like that is like riding a spring. I breathe deeply and keep my seat light on the saddle. I keep my reins loose and try to convey nonchalance with my body all the while keeping him between my legs and seat and hands. It is a tough go at first, but about 1/4 mile into the ride he snorted a relaxed sigh. Later, at the far southeast corner of our property he spied a canoe (one he has seen 1000 times) and whipped around toward the barn. I started talking to him, telling him anything that popped into my head like I was having a conversation with him. He came back down to me. My mom usually walks along when I ride and I think our conversations keep the boys relaxed. Since it was raining, she wasn't walking along so I had to create a conversation. I told Pie of the entire menu I served at a recent party. When I got to the crudite part I stressed the word carrots. No reaction, but he did like the word "triscuit" - it must have sounded like "treat" because he kept turning his head around to get one.

As we got close to the barn I could feel Pie completely relax. I was cold and shivering, but he was calm and the sweet Pie we all know and love. I did end up keeping the horses in again last night because the pastures were saturated, but Pie walked out for turnout this morning like a perfect gentleman.

Today I am counting our blessings - it could have been so much worse. I feel unbelievably grateful for our barn, house, electric and water and I am thinking good thoughts for those who were not as fortunate.
Posted by juliette at 1:56 PM