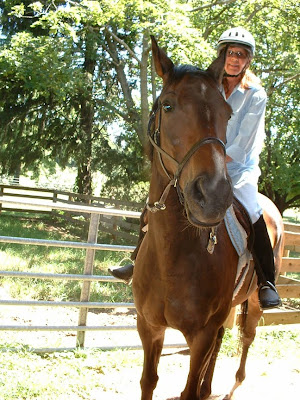 Here is a photo of Mom and Sovey yesterday right at the beginning of our ride. We had to ride in the afternoon, but our temperatures have cooled off to something from September! It has been fabulous for riding. Sovey and I went out alone a few nights ago and we encountered a new inflatable swimming pool at the home of our barstool-apple-friends. We trotted up for our apples and then...STOP...EARS UP...NECK UP LIKE A GIRAFFE...Sovey did not like the new pool!!! Quiet circles and singing and neck massage and, of course, two juicy apples put it all right. But, then...LOW FLYING HELICOPTER! Oh, no, I was a little panicked after reading dear blogging friend, Once Upon an Equine's helicopter ordeal. The turnpike is on the other side of the woods and I imagined that there was an accident and the helicopter was an emergency vehicle. I decided that if it got any lower and had to land in our field, I would just dismount and hang on to Sovey's reins as long as I could. Sovey was completely fine with the helicopter even though it was low and loud. Fortunately it did not land.
The next morning, Mom and I headed out on the boys and Pie was leading as we approached the new pool. I was on bareback and I thought he would react, but I gave him all the reins and just grabbed a handful of mane. He looked at it, but nothing else. What a brave, good boy! 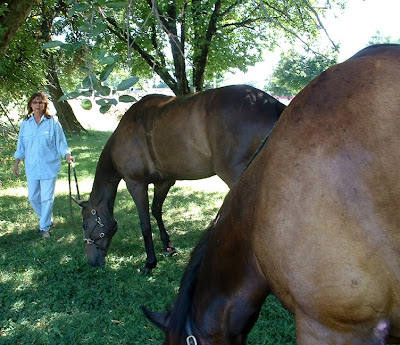 This photo is of Mom with Sovey and Pie. They are grazing (I am holding Pie's lead) under an apple tree. Right after I took this shot, I told Mom to give me Sovey so I could hose him off (you can see his saddle mark). As I handed her Pie I said, "He is nice and quiet." HA! Famous last words! A few seconds later something must have stung the poor sweetie and he did a half-rear hop and then I saw his hind feet high over his head in the most amazing stand-still buck! Mom took him away from that spot and he was fine, but we could not stop laughing at how fast things can change in the world of horses. 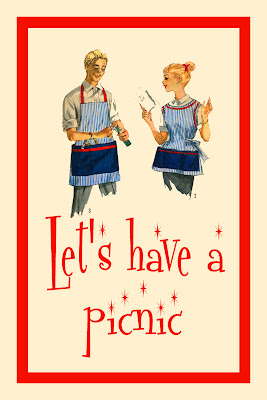 Here is a poster I designed for the 4th of July. I hope you have a great holiday! 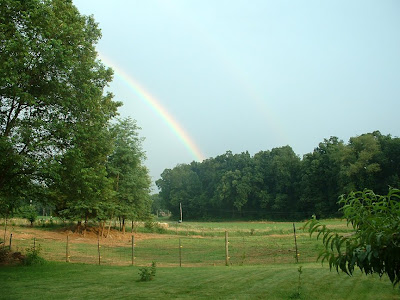 A recent rainbow over the donkey's field. Summer is just grand!