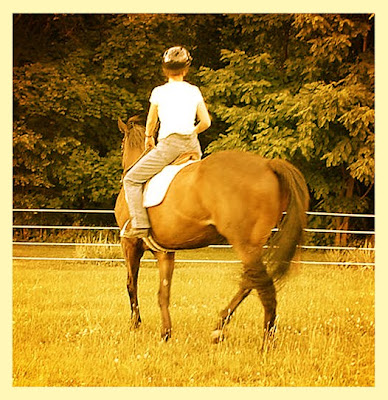 I love Capote's description in Breakfast at Tiffany's of that icky, ginchy feeling you get for no apparent reason. Pie and I both had the mean reds on our Wednesday evening ride. I had had a perfect ride on Sovey on Tuesday evening. It was cool and he was a wonderful boy - I hated to dismount. On Wednesday morning the rain was pouring buckets outside and I was so grateful. We needed the rain. By noon, though, it was unbearably humid and sunny and horrid. I was so angry at absolutely nothing. My poor Maizie and mom bore the brunt of my tirades. I was certain that my evening ride on Pie would lift the dread. Unfortunately, he was a cranky pants too, from the moment I got him out of the pasture. He grazed angrily, ripping the grass and shying at nothing. He swung around his head this way and that, swatting flies. Usually, when I groom him in the cross-ties he relaxes, but this evening he was too mad to settle. I could just tell that he didn't want to do anything. I thought a small jaunt out might help both of us. I wanted to use the saddle for my own safety, but I knew that might be worse for his mood, so I hopped on bareback. (The photo above is from another day.) We walked around the perimeter of the farm. He twirled his head and squealed in protest of any decision I would make - (like "let's go this way"). My neighbors told me they saw that I was having trouble with him. I started singing to ease his annoyance and it helped very little. Apples on the barstool were crunched angrily and quickly. Walking through the woods was a series of little tantrums. I loudly and heartily rewarded any willingness on his part. He likes to hear, "Good Boy", thankfully. I made him walk back to the barn and then leave again, which he did well and I loved him up for it. Then we stopped. He still wasn't with me. Apple tree grazing and grooming was distant and angry. Quick chomping and foot stamping at flies. I brought him back into the barn. Connecting with a horse reminds me of the account of drawing the "W" on Helen Keller's hand to pull out the memory of "water". By this point, my own mean reds were dwarfed by the mean reds of my big boy, Pie. What could I do? Should I just put him back outside and start again tomorrow? Absent-mindedly I started scratching his foretop. He put his head low and his lips out like a camel. I continued down his mane, withers, neck, chest and legs. Pie was back! He was calm and present and completely into the full body massage. By the time I put him back out with Sovey (about 30 minutes later) Pie was one happy puppy!
Posted by juliette at 3:32 PM