apples of the valley hold the seeds of happiness 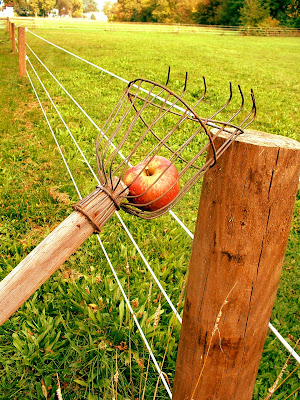 If I fully describe the rides and weather that we have been having here, you wouldn't believe me! I am so spoiled. The light in our woods is golden and the horses act as if they know that these days are special. Cool temperatures, no bugs, yellow and red leaves, happy, sweet horses. It doesn't get any better. Yesterday, Sovey was the best he has ever been. I was supposed to ride him on Monday, but Maizie had off school and Brian and I took her canoeing. Sovey knows if he misses a day, and he is very eager to go when it is finally his turn again. I groomed him while he munched hay. Munching helps him forget how much the curry comb tickles. He closed his eyes and allowed me to get off every speck of mud. It was a very peaceful grooming session. Pie was happily munching hay in the small paddock nearby. Before tacking up, I walked Sovey out with me to the far field to turn off the electic fence out there. Both horses lead nicely now, with zero grass diving like we had last fall. Back under the forebay, I put the lead over Sovey's neck and he stood perfectly still for me to tack up. He doesn't move even when I go into the tackroom to get things. We rode out and around the entire farm. He was quiet and not rushed for the whole ride. Pie screamed a few times for us, but Sovey pretends he doesn't hear it. Sovey jumped once at a tree that a neighbor cut down. Pie jumped at this too, the other day. I wonder if that tree gives off a "death" color or something, because both horses jumped not like they were shying, but like they were distressed. Weird. Then, onward we went for the rest of our perfect ride. After untacking, I walked Sovey around the property. He really liked that, I think. He investigated some new groundhog holes and different areas that we don't ride near. We finished with him gobbling some of our luscious apples.
Later in the evening, Brian, Maizie and I all went back to the barn to play tennis. Mom joined us and - hooray - so did Pie and Sovey! They were grazing right near the court. I put some hay and apples there to encourage them to stay. They were with us the whole time we played. The sun was setting and our town's Halloween parade was getting under way with marching bands. Two dark horses grazing and leaves rustling over the tennis court. Sigh. What a life!
Posted by juliette at 6:36 AM