you don't know how much I love you 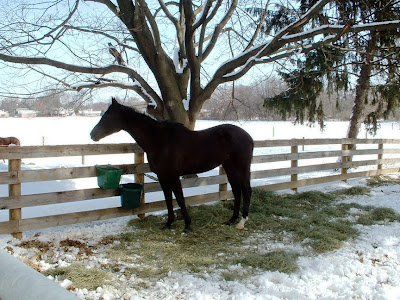 I think we ended up with an amazing horse in our little Foggy. Already I can tell that he is sweet and sensible.
We had my barefoot trimmer, Mike Glenn, on Friday afternoon. I can't say enough good things about Mike's patience and knowledge. I had been told that Foggy was not good for the farrier so I asked Mike to give him plenty of time to process what we were asking. We both agreed that we would like to get his shoes off, but we weren't going to force the issue if he wasn't cooperating from the beginning.
Our bank barn has low beams that would make any pop-ups dangerous, so we decided to start outside under the forebay. The sun was shining, but there was a huge snow squaw the entire time. It was actually very beautiful.
Mike introduced himself to Foggy by slowly touching him all over, especially his legs and feet. He didn't ask to pick them up, but Foggy offered them. Then, Mike did ask and held them each for a few seconds. Then he cleaned them out and started just pretending to file them. Foggy was excellent with three, but he did try to pull away with the foot with the white sock. He was funny because he would pull it away like he was afraid, but then he would offer it again. Mike said that Foggy was really trying. That made my heart sing because I was up at Foggy's head and I could tell by his facial expressions and ears that he wasn't being nasty and I was relieved that Mike could tell that too.
Mike easily removed the front shoes and the black back. The white (left rear) took a little more time, but nothing bad at all. We discussed trimming him, but decided to stop at that since it had gone so well. Foggy definitely has good memories of Mike and standing under the forebay.
Everything I have done with him so far has been just as easy. I am so relieved and grateful.
I have introduced him to a new pasture that connects to the paddock. He is still separated from the boys, but he has a bigger space to play and can see the horses. Pie and Sovey stay up in the pastures that are near him, which I think is kind. At the end of the day, they look at me like tired older siblings, asking to be relieved of their duties. I am not kidding. The second I put Foggy in the barn for the night they walk out to the far pastures. They could go there all day if they wanted, but they stay near him.
I am trying to maintain the same routines for Pie and Sovey as I did before Foggy's arrival which has been tough because of the snow and more snow we keep getting! I have groomed and "grazed" (no grass) the boys each day, but today was the first day I rode. I chose Sovereign, my go-to-boy because he is the safer of the two. I put Pie in the paddock alone and Foggy in his nearby pasture. Sovey took me out and around the farm, choosing to walk away from the barn on every trail which made me smile. Pie hollered the entire time like he always does, but I could see from a distance that Foggy ate his hay peacefully ignoring the big-baby-Pie-Pie's screams.
I introduced Foggy to hand-grazing today in a tiny little grass spot beside the tennis court. He did very well.
A couple of days ago, Foggy did not want to go back into the barn. Then, one evening he went into the barn, but would not go into his stall no matter what I did. He went into the stall that had been Sovereign's. I made the switch and gave him that stall and now he walks into the barn happily. I am not sure what that means, but I don't think he liked the other stall for some reason. I am listening, Foggy. You are too unassuming and willing to ignore.
Posted by juliette at 2:51 PM