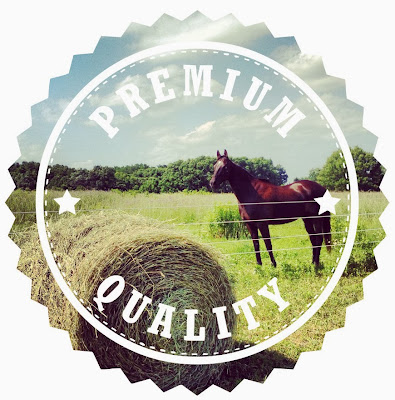 Oh, I am so mad at myself right now. Today was supposed to be a fun day and I blew it. Nothing super bad resulted, but I could have done much better with Foggy.

Today was rainy, misty, and dark - very dark. The clouds were depressingly thick which made it seem like it was evening all day. But the temperatures were warm and when I brought the horses into the barn around 2pm I envisioned a good ride or maybe even two.

Pie had a foretop full of burdock burrs which annoyed me because of the time it takes to extract them. I had worked through a tough bunch at the same location yesterday and today he was waiting with more. Grrrr. But, then I saw Foggy. He had a huge blob of burrs in the sweet, long hairs that stick out of his left ear. Oh no - poor honey! 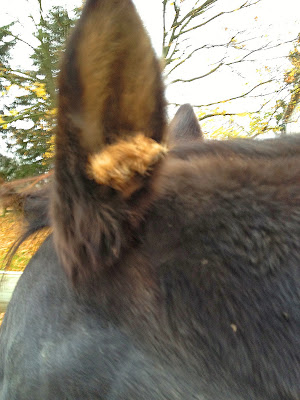 I got to work right away on Pie and allowed Foggy to relax in his stall. Pie's burrs took 20 minutes to remove but he was fairly good about the process. I ended up taking him outside to graze to get the last wad of burrs that were buried deep under the first. He deserved the grazing after all my tugging on the ratty knots and at least I could work on the worst part while he nibbled.

Then I started in on Foggy and that's when I totally messed up. Right from the start Foggy was having none of it. I thought this was unusual because he is the most patient horse I have. He stands for anything and allows me to treat wounds and burrs anywhere, but not that ear. I brush his ears out each day with zero difficulty.

A few weeks ago he had burrs in his foretop that were driving him nuts and he allowed me to slowly extract each one. But today he was determined that this ear was off limits! The burrs weren't that deep but he twisted and turned and avoided my help over and over. I tried everything but nothing worked.

Foggy doesn't actually bite or get nasty to defend himself but his displeasure was more than apparent. He gnaws his teeth in nervous gestures - not at me - at the air. Then he turned his neck to avoid my fingers. I soon realized that it was because it was this ear. The left one. I don't know if Foggy was twitched at the track but this would be the ear they would use if he was.

Of course I never yank at his halter or slap or yell at him - no worries there, but I just would not give up. Ugh. That is what makes me so mad now. I was calm and quiet and slow and patient, but I was stupidly so determined. I tried this chair, this ladder, outside grazing, inside eating. Nothing worked and all I did was worry him.

I pride myself that I listen to my horses. I am quiet and slow with them, but so what? Enough was enough early on and I kept on trying. I just was so sure that he was annoyed by the burrs and I was equally sure that my kindness would prevail.

Foggy didn't notice my kindness, my quiet voice, my patience. Sometimes you just have to stop even when you believe you are doing all the right things. But it took me too long to get that message.

Finally, I turned them all back out. No ride. I cried frustrated tears and said every choice word I know back in the barn out of earshot of Pie and Foggy. (Mom and I joke that Sovey can handle colorful language but Pie and Foggy are too innocent for such indelicate speech. Naturally, we would never swear at Sovey but he is "old" enough to hear an occasional rant about world injustices.)

Today is November 17th. I met dear Foggy three years ago today at the racetrack. I have such vivid, special memories of that day and I think that is why I was so stupidly tenacious about trying to get those burrs out. I wanted to ride, I wanted to help him, I wanted to show him how much I love him - today of all days! But, the bottom line is that just letting him be after my initial attempt would have been so much more loving, more meaningful.

So the burrs remain. I guess I have to find the patience over the next few weeks to allow his real mother, good ol' Mother Nature, to take them out in her time.
Posted by juliette at 8:40 PM