fear is the lock and laughter the key 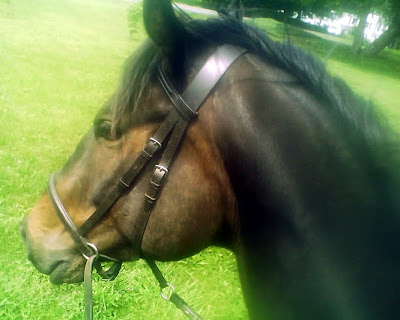 Saturday morning was sunny but very windy. After grooming and grazing the boys, I got a crazy idea to ride Pie without a bridle or saddle. This photo above is from my third ride on Pie yesterday. I could not handle a camera during my first ride without a bridle. I had read Bay State Brumby's post Of Pigs and Superheroes while drinking my coffee in the morning, and I was very inspired to ride Pie without anything. Click here if you didn't watch the videos. I ride Pie bareback and bitless all of the time, but I really want to work toward riding him without anything. Even though it was windy, he was being all lovey-dovey and I could tell he would be a good boy. I had my mom hold him in his halter and lead so I could get on. She was reciting a continual litany about how crazy I was, and how bad they (the horses) were in the early morning, playing and racing around and that I was nuts. I do think the comedy of my mom and I together is understood by Pie. He is relaxed through all our antics because we don't take ourselves too seriously. Finally, I got on and unhooked the lead. He still had his halter on, but I had nothing attached to it so I held on to his mane. At first, he stood by the gate completely baffled about the whole setup. I don't ride him in the pastures very often and he wanted to go out. I squeezed very gently, and he walked on. We walked down and around a second pasture. Some low flying loud military planes (Blue Angels?) went over, but Pie held it together. I wasn't able to get him to bend as well as I imagined, but he still responded amazingly well to some of my signals. It was a super beginning. I kept smiling and laughing the whole time because I dream of riding him without a bridle or saddle and I was that much closer. I hope I can get some photos of our next "naked" (him - not me!) ride.
Next, I put on Pie's bridle and rode him around the farm until mom was ready to ride. Then, I tacked up Sovey-boy and we all headed out for a perfect May ride in the wind and sun. We had a ball! 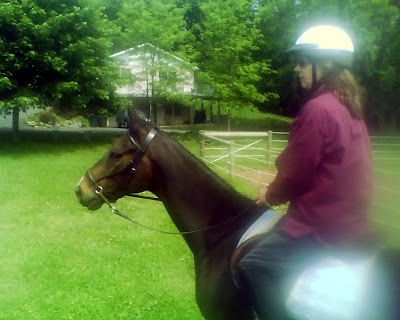 Sovey spies a baseball game at the church. 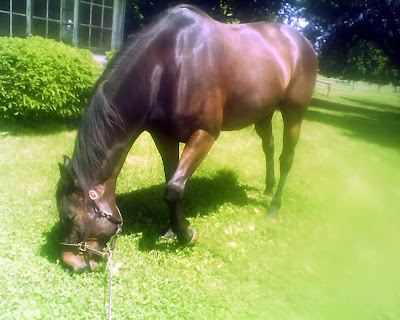 Pie munches yummy clover after his good-boy ride.
Posted by juliette at 8:47 AM