And all my dreams would come true 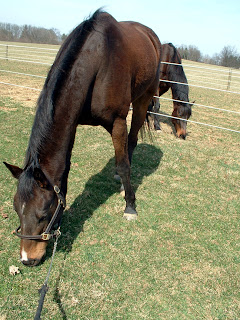 Here is sweet Sovereign grazing. He and I had our best ride to date on Sunday. I have been having the usual barn sour/buddy sour issues with him so I wanted to concentrate on shifting his focus. Just for fun, I removed the criss-cross leather pieces under the jaw on the Dr. Cook's bitless bridle and hooked the reins directly to the noseband rings. Therefore, there is a browband and noseband, but no throat latch.  Sovey loves changes, especially ones that free him up. This set-up has no more control than the halter and reins, but it is lighter on his face.  I am beginning to realize that he isn't uncomfortable in his halter or saddle, but he is uncomfortable leaving Pie and Foggy.
We started out on our ride to the south of our property. Previously, his buddy sour worries manifest in him going horribly slow/balking/ear pinning for the first 10 minutes out away from the barn. Occasionally, he tries to turn around quickly and head back. He also refuses to step on the driveway at all if I am on him, which may be unrelated (sore feet?).
I decided that I was going to keep him moving forward (almost asking him to trot) with my reins long and if he turned back I was just going to go with that and keep him moving in any direction. That way we wouldn't get into a turning/tugging match, but he would have to keep moving forward.
For some reason, this approach worked. He didn't turn around once and never displayed any hesitation. I think our normal slow, boring, walk allows him time to worry about the other horses. When I am asking for the extended walk, he has to think and forgets his friends.  Once away from the barn, I rode him more collected and he was fine. Good Sovey-boy! 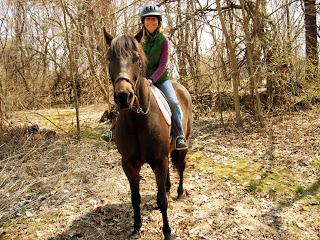 Monday morning Pie and I had a warm, sunny ride before the vet came for spring shots (this photo is from chilly Thursday).  Our temperatures got into the 80's later in the day and Pie anticipated the heat with a sleepy, perfect jaunt around the farm.
I put all the horses in their stalls for the vet's visit. Pie thought about throwing a little fit since he was inside and this was clearly NOT part of his accepted routine, but our earlier ride must have taken the edge off. All three horses are good for shots and never moved a muscle. I am so proud of them. They all stand like statues! Their fecals revealed that they are shedding well below the accepted range, so we are just going to worm in May and then recheck in September. I like that!  No unnecessary poison. An errant skunk got in the pasture on Sunday evening and the horses were sniffing it. Good timing for their rabies shots.
The last few days have been extremely stressful for me trying to juggle Foggy inside and outside during our torrential rains.  He doesn't have enough fat at this point to get soaking wet with our below normal temperatures. He was out all night on Monday and I didn't sleep at all listening to the pouring rain. We have the sheds, but he does what the big boys do and they are known to stand outside and eat. I originally thought I would get him a rain sheet when he arrived but I know I could have also taken the money and whipped it out in the street and it would have been just as helpful. This is because my Pie-Pie boy is very naughty and a sheet on Foggy would last about one minute until Pie ripped it off of him and tore it to shreds. Pie is known for his fly mask shredding and wheelbarrow tipping and any other devilish antics he can cook up. Sovey kindly handed me the road apple fork the other day, so he isn't above playing with "toys" either. So, the Foggy inside/outside marathon continues until we get a few consistently warm days!
Posted by juliette at 9:09 AM