Sun and shower, wind and rain 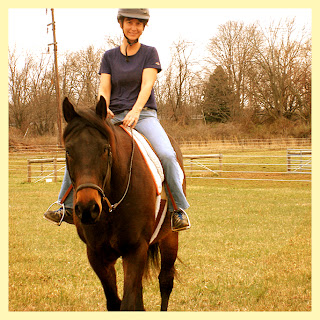 Here is a photo of me riding Pie last evening.  I look goofy, but he looks adorable, as usual.  I think Pie has a very pretty head and face.  We had just finished our trotting work when Maizie took this picture. She took videos of us trotting, and I hope I can post them soon.  She is saying in the background during the video, "Ok, here is Momma and Pie-Pie trying to t-r-o-t", because neither of us were too spunky and getting him moving was a feat. He is just a big, roly-poly doll baby and I am just a wimp who never wants to make a horse work.
Maizie had her best friend, Sophie-girl, over to the barn to play tennis and the 3 children who live in the farmhouse joined them, so the whole gang of kids were laughing and playing tennis and running and doing cartwheels and climbing trees, yet Pie seemed calm and content.  It helped that we had a single day of 70 degree temperatures (it is cold and rainy again this morning) to keep the big boy relaxed. Still, it was windy and unsettled as a storm approached and Pie was unusually good.
Earlier Brian and Maizie were up on my grandmother's roof installing a new flue Brian had built. 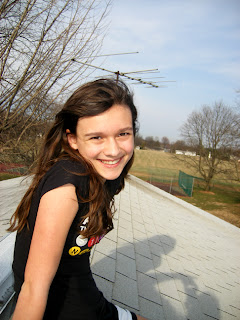 None of the horses seemed to mind "the roofers".
Watching Maizie and her friends whoop it up from horseback was magical.  The sun was setting and Pie and I walked the entire farm in and out of the woods and we could see and hear the kids playing and it seemed like summer to me. We don't live in a neighborhood and Maizie rarely gets to enjoy the free play I remember from my suburban childhood.
After our ride, I brought Pie right beside the tennis court for grazing.  He was not rattled at all by all the tennis balls flying this way and that.  I am very proud of him.  You could tell that he enjoyed the silly playing and laughing.  I think laughter must be a universal good energy indicator, crossing language and species boundaries.  Pie never flinched the whole evening and even, while grazing, tried to rummage through Sophie's purse in search of her mint flavoured gum.  He is a character!
Posted by juliette at 8:21 AM