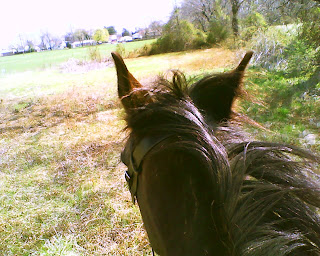 We had an equine dentist out to work on the boys on Wednesday. Here is Sovey, above, giving me the listening ear on our ride Thursday. Sovereign was a happy boy on our ride - I think mostly in part to his new ability to chew correctly and relax his facial muscles.
My Sovey is not always a happy camper. I have been using clicker training with him to work on "happy faces" (I call it Ears Up Mother Brodie) when on a lead or getting tacked up, and he is super quick to understand that "trick" but in the pastures, at liberty, he still carries his ears back.  That tells me that something might hurt. I have learned that before you call in massage or chiropractic help, it is important to make sure that a horse has proper jaw alignment. Kate over at A Year With Horses did an exceptional post back in December of last year about how a natural balance equine dentist can assess lateral alignment and front to back movement. Kate's post was well written and informative and I've referred to it many times since. I phoned her dentist, Mike Fragale, and he gave me the name of a natural balance equine dentist, Rick Samuels, whom Mike recommended to visit my horses in Pennsylvania. Rick doesn't have a website, but his email is: lazysequine@yahoo.com.
Kate's post describes how natural balance equine dentistry is different from traditional floating. I do not want to try to restate what she has already said so definitely check it out here to understand the different approach.

I had the boys in their stalls when Rick arrived. They were very calm and continued to munch hay happily when Rick came into the barn. We talked about Sovereign at length and then Rick went around to each horse and introduced himself and he watched and felt their jaw and face and teeth. Rick explained that the upper and lower jaws on a horse are supposed to grind and chew in an oval motion, moving around freely. If the teeth grow enamel on the outside edges that aren't used properly due to previous improper floating, that growth is like little "hooks" that latch the jaws and stop the correct oval-shaped grinding movement. In addition, as the horse puts his head down to graze, the jaws are to move forward freely, but the sharp hooks can prevent that too. Rick said that Sovereign had very little movement laterally and practically none when he put his head down. A horse is supposed to have relaxed muscles while resting with his head dropped. When hooks prevent the jaws from aligning correctly, the horse has to use his muscles (constantly) to hold them in the unnatural position.  This puts strain on the temporomandibular (TMJ) joints and can cause pain and stress down through the neck and back.

Rick is wonderful with the horses and worked gently and quietly and completely won their trust. He will sedate the horse if necessary, but surprisingly, all three of my boys were willing to have Rick work on them without sedation. I would not have believed this if I hadn't seen it. Rick said that Sovereign seemed to be aware of the help that he was offering, and he leaned into Rick allowing him to work easier. Pie had "wild" eyes and Rick was sure he would have to sedate him, but when his turn came, Pie cooperated fully. Poor little Foggy had no lateral movement at all to the one side. He was so good that I was able to get my hands in there and feel the points before and after removal.

I can honestly say that the horses acted unusual (in a good way) after Rick was there. They seemed relieved and shocked and  a little unsure of their new movement.  Rick said that sometimes they will "quid" or ball up hay and grass for a week after because their jaws and muscles need time to get used to the new movement.  My boys started chewing well straightaway. In fact, Sovereign always had a problem taking treats from a flat hand and would inadvertently pinch your hand. Sadly, I think someone in his past punished him for this when he could not help it. As I took him out to the pasture after his dentist work, I palmed him a round carrot chip and he took it like a normal horse. I was so shocked, I kept feeding him more!

I worked for a large animal veterinarian for many years and held countless horse tongues while Doc filed away points with a huge metal rasp. Doc was careful to check with his fingers each tooth, but I don't think the science at the time realized the correct angles of the molars and incisors and how they fit like a puzzle.

This year, when we were in Florida, there was an article in the St. Petersburg Times about a local equine dentist going "high tech". He had a shiny new van equipped with thousands of dollars in power tools to grind and buff and file horse teeth. Unfortunately, power tools can often overfloat a horse's teeth and take away the perfect meeting of upper and lower teeth for necessary grinding.

I am so grateful that I read Kate's post and called Rick. Another testament to these blogs. I am certain my horses are more comfortable now. Foggy is grazing like a lawn mower now and he needs the extra weight!

The rain continues to pour down on us, yesterday and today. I just asked Brian where Noodlebug was and he said, "Up on her throne." Here she is...the princess on her throne, sleeping away the rainy day. 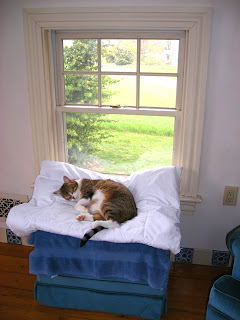