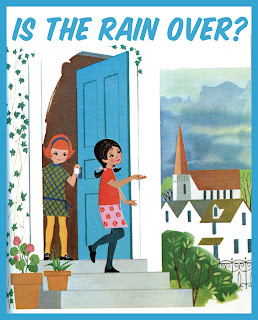 I think it actually stopped raining!  Hooray!
Yesterday I put the horses out in the morning to run and play before the farrier arrived.  They raced around but then the rain returned in buckets. I brought them in and had Pie in the cross-ties when farrier Mike got there. Pie tried very hard to be good, but he was certain that Mike was a playmate and holding up his foot was a fun game.  This is NOT Pie's usual behavior with the farrier.

Pie would stand for a few minutes and then he would pull his foot back and wait for Mike to pull too. You could see by Pie's face and forward ears that he thought it was a fun trick. At one point, I looked back and saw Mike holding on to Pie's right rear as it circled many times in the air.  I thought to myself that I have the best farrier. He never let go and he didn't get angry. He understood that Pie was not trying to kick him. Mike also realized that patience actually helped us keep Pie with us and get the job done faster. It was quiet in the barn as he worked.  There was no slapping, no yelling, no unhappy reactions.  I held Pie's lead and Mike held his circling feet. There aren't many people in the world who would understand the difference between letting a horse get away with something that should be corrected and letting a horse have some wiggle room in an unusual situation. I happen to have a farrier who does and consequently, Pie did stop pulling and his feet were all trimmed and filed perfectly in a short time. And, Mike's patience on this visit taught Pie that the farrier is confident and can be trusted in the future too. I see the idea of instilling confidence in horses thrown around all the time and usually it involves "doing something" to a horse. I love when confidence comes from being patient, still and quiet with a horse. Sovey and Foggy were perfect angels who stood quietly for all four feet.
I had to cancel the Dairy White spraying for today because the barn won't dry with our rain and humidity so I will reschedule that for later in September. This leaves me free to ride between promised lighter raindrops. I know the footing will be dicey, but I still might attempt a few minutes on Pie. He is a horse who needs his caloric intake balanced with his energy output. Because of the rain, his yummy hay intake has tipped the scales while snuggled in his warm and fluffy 15' x 14' stall. Today I hope to ease him into balance again with quiet walking.
Posted by juliette at 7:36 AM