You can hear happiness staggering on down the street 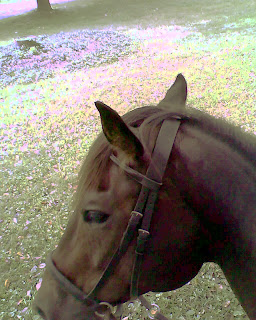 Yesterday was a day for making lemonade because it seemed like there were a lot of lemons tossed in my direction.  Maizie and I went to the barn in the late morning to run and mow pastures.  She agreed to help me try to tackle our extra long post-flood grass. After our run, I put the boys in their stalls with yummy snacks and then realized that the grass was still too wet to mow.
We went home for lunch and it got windy and sunny so I came back alone to mow.  I got on our big Grasshopper mower, but it wouldn't start.  The engine was not turning over and the more I tried, the more the battery sounded drained.  I could not get the battery cover off (I didn't have the right tools for the job) to charge it.  I phoned Brian and he said he would come back with me after dinner and open it.
So I tried to move to plan C - riding.  I groomed and tacked up Pie and we headed out through the fields.  He was wonderful, but we could barely walk two feet without stopping to swat flies. The flies are the common fly we have all the time, but they are mean and biting hard now. Riding was almost impossible.
Since owning these horses, I have been extra perceptive about all of Nature's ways. Sometimes I can just glimpse the "method to her madness" that we, as humans, try and try to "fix" but to no avail. Flies and bugs in general are awful now after the heavy rains. Is that on purpose? If my horses were to be completely free to gorge down the extra rich grass, they might colic or founder or both. The insistent bugs keep their eating light.  I know it sounds like rationalization, but seeing how futile all my attempts to stop the bugs are, I am left with nothing but rationalization.
I grazed Pie under the apple tree and went back for little Foggy. But as I walked by, Sovey let out a little, soft, throaty nicker. I was going to ride him after Foggy, but his nicker was soooo cute, so I grabbed him first instead. I put on his bridle and jumped on bareback. My thought was that the brothers might not be as interesting to the flies because they aren't as fat and juicy as Pie. I was wrong. Sovey and I got out to the big field and were besieged by biting insects. Sovey swatted and jerked his head around this way and that.  I tried to keep us moving faster, trotting bareback (which isn't too comfortable on Sovereign), but nothing worked.  He put his head down to scratch a leg, and his bridle came off over his head (I still don't have the throat latch criss-cross part on). Oh, nice, as Onslow would say. I am bareback in the middle of a field with reins in my hands and a bridle on the ground. I slid off and tried to even out my breathing. This is exactly the kind of situation where I convey bad energy. I am fine riding, but on the ground I can't keep it together. Right then Sovey put his head up high because someone started a chain saw in the distance. I somehow managed to get the bridle back on him.  We hobbled back to the barn, stopping to swat flies all the way. A grasshopper jumped into one of my high Wellies and started to bite me in its panic to get out. I couldn't get my boot off with all of Sovey's swatting and swishing. It was a circus. Ugh.
I grazed Sovey and then got out the littlest angel, Foggy.  I knew better than to try to ride him with the flies.  I groomed him in the cross-ties and out we went to the apple tree.  He was just getting into happy munching when I saw Brian pull into the driveway. He had a big smile and said that he thought he could help me now with the mower. I put Foggy in the pasture and tried to "not look a gift horse in the mouth" - I was so appreciative of Brian's help, but I was just starting out with Foggy and I knew he would get short changed with his special time.
Brian helped me and we got the mower running but by then it was dinner time.  I vowed to Foggy to come back after dinner, but it stormed all evening.  Ugh.  Many lemons, and the lemonade I made was bitter.
Today is Foggy's day.  I am going to spoil him with a long morning of grooming, grazing and riding!  Hooray!
Posted by juliette at 7:40 AM